Our impossible beliefs had better be novel 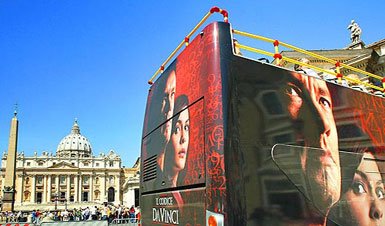 AT ST. PETER’S SQUARE: A tourist bus covered with an advertisement for “The Da Vinci Code” movie is parked at the Vatican, where a debate is raging over the blockbuster novel. (Alberto Pizzoli AFP/Getty Images) Via LA Times

"We're not a secular society, we're a credulous one," according to Frederick Forsyth, author of best-selling thrillers including The Day of the Jackal, when discussing Dan Brown's book on BBC radio.

It seems to me that Forsyth has more accurately described the atmospherics around the novel and the new movie than any number of fulminating preachers who denounce it.

The entirely skeptical Adam Gopnik also did quite a job on this phenomenon in a New Yorker review:

A cultural anthropologist, a hundred years from now, will doubtless find, in the unprecedented success of “The Da Vinci Code” during the time of a supposed religious revival, some clear sign that, in the Elvis mode, what a lot of Americans mean by spirituality is simply an immense openness to occult superstitions of all kinds.

We live in a culture at once hungry for belief and very unsatisfied by what's on offer.

Most of the discussion of the film simply exemplifies our lack of practice at thinking about our culture's conventional faith stories. Tracy Wilkinson, in a generally thoughtful effort to discuss the film's impact on the Roman Catholic hierarchy, claims that Dan Brown's premise that "Jesus married Mary Magdalene and had a child [is] an idea that challenges the divinity of Christ...." Huh? The guy was a Jewish peasant carpenter. That he should have been married and fathered a child seems completely plausible; it might not have seemed worth mentioning to his contemporaries. The "orthodox," wildly implausible idea that Jesus was both God and man is both less and more believable than the suggestion he had a family life.

We, the citizens of this vastly rich, unthinkably powerful, early 21st century empire, don't much like the stories of our own lives. Living in a shallow commercial culture surrounded by lies, we want new and better stories. The ancient content of Christian faith -- that God mysteriously became a human being, died, and appeared alive again -- is both unbelievable and too familiar to be interesting. We want this year's story, a shining new one. Curiously, our standards of proof are no higher for the new one than for the old one: neither seems plausible in the light of contemporary notions of material reality -- but novelty automatically improves on antiquity for many people. So here comes The Da Vinci Code. None of this is any reason to forego a good yarn. And none of it has much to do with the lived experience of looking for God in the Christian story.
Posted by janinsanfran at 6:21 PM

People are overlooking the fact that The Da Vinci Code is a movie based on a NOVEL. Fantasy. I've blogged about it too!

Re: "People are overlooking the fact that The Da Vinci Code is a movie based on a NOVEL. Fantasy."

If the Bible represented the literal truth and accurate history, there would be no need for faith in the assertions of deceptive and duplicitous clergy and their ilk.

It is quite a joke that the Vatican and Catholic Church have the gall to accuse the author of a novel of attacking their fantasies and dogma. Remember that this is the same organization that manufactured fake relics and miracles for many centuries. This is the same group that massacred and tortured people for seeking the truth and having a mind of their own. This is the same group of deluded deceivers that makes more noise about a fictional book and movie than about child raping priests, aids, famine, or even the Holocaust! At what point does the Vatican's behavior go from the absurd to simply purely evil?

It is undeniable the New Testament is framed by symbolism and allegory. The same is evidenced in the Dead Sea Scrolls, Gnostic texts, biblical apocrypha, and other related texts. All ancient religious, mystical, and wisdom texts have been shrouded in mystery for millennia for one primary reason: The ability to understand their widely evidenced symbology was lost in antiquity. How do we finally solve these ages-old mysteries? To recast an often-used political adage: It’s [the] symbology, stupid!

It's amazing the Vatican still tries to insist the Gospels are literal truth. It is beyond obvious they are replete with ancient Hebrew symbology. Every miracle purported for Jesus has multiple direct symbolic parallels in the Old Testament, Apocalypse, Dead Sea Scrolls, and other symbolic narratives and traditions.

Likewise, the following Washington Post article ( The Book of Bart) describes how many changes and embellishments were made to these texts over the centuries, unequivocally demonstrating they are not original, infallible, or truthful.

What then is the purpose of "faith" but to keep good people from seeking to understand truth and wisdom? It's no wonder the Vatican fears the truth more than anything else. Now comes justice, hot on its heels... (symbolism...)

Revelations from the Apocalypse