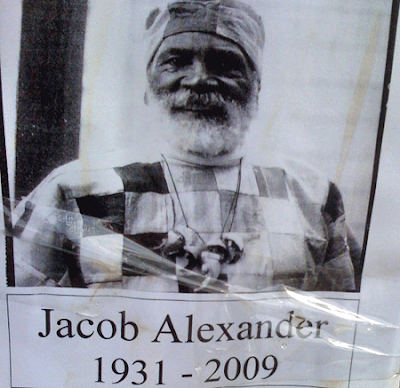 Appropriately, I learned that Jake had died from a flier in Golden Gate Park. From his obituary, I learned that he was 78, a creator of fabric art, and had traveled widely and lived imaginatively. None of that seemed surprising.

Every week day for decades, he walked the path adjacent to Kennedy Drive in Golden Gate Park. According to a San Francisco Chronicle article from 1999, he started the practice in 1982, moving from the Mission to the Panhandle to get closer to his starting point. Regular as the sun, he greeted everyone on the path, slapped hands, hugged and wished passersby well.

I must have first met him soon after he started walking -- I've been running in the park since the late 1970s. We'd say hello and I'd wonder if his walk was some sort of spiritual path. I was always glad to see him; he acted as if he was equally glad to see me.

In the 1990s, I worked out of Oakland and seldom got to the park during the week, so I didn't see Jake. Then, at the beginning of this decade, I was back on the San Francisco side of the bay, running in the park again. And there was Jake, still walking daily. To my astonishment, he remembered me among the 1000s he must have greeted over the years and wanted to know how I was doing these days.

I last saw him sometime in the spring. I'll miss knowing he is there.

You can read more about Jacob Alexander, see some of this art, and find the announcement of a memorial walk to be held in his honor on September 20 at his website.
Posted by janinsanfran at 4:36 PM

Email ThisBlogThis!Share to TwitterShare to FacebookShare to Pinterest
Labels: gone but not forgotten, San Francisco