The U.S. government has charged three men with lying to federal agents about an apparent terror conspiracy. According to Josh Marshall this one may have more substance than the ludicrous aspiring dimwits entrapped in violent fantasies who authorities have rounded up recently.

In most of the earlier terror cases over the last decade, the suspects were either total chumps who were lured into stings by aggressive government informants or they were genuine bad guys who really wanted to blow something up but, in most cases, lacked the know-how and connections. And it was in the process of casting about for someone who would help them learn to blow things up that they came up on the governments radar and were led into a phony 'plot' that got them arrested.

Although Marshall doesn't really say why, he fears this bunch were more competent and hence more of a real threat.

The conspirators may have wanted to plant bombs in subway stations or other public transport facilities -- and we've seen from London and Madrid what horrible harm to can be done by such attacks. Survivors of the London blasts are still seeking a public inquiry, if only to damp down "truthers" who believe the British government was involved in the attacks. (H/t Rachel from North London, herself a survivor.)

Maybe we need to emulate the Brits by adopting these tote bags. 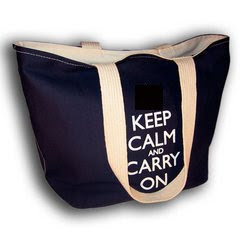 The slogan was originally a message from the king, put out as posters during the German "blitz" bombings of British cities during the Second World War. Those folks knew the way to defend their country under attack was not to rush about in hysterics, but to hold fast to their way of life and values while facing mortal danger.

We could use a little of that spirit instead of letting our fears lead us to follow the course set by people who want to destroy the best facets of this country, whether they be Osama bin Laden or Dick Cheney.

For U.S. consumption, I've excised the image of the British crown that is part of the original graphic. You can see the original here.
Posted by janinsanfran at 12:05 AM