Who has clout with Congress? 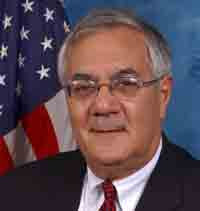 Since I quoted Simon Johnson yesterday doubting that meaningful financial regulation will come of recent financial follies, I was interested to read Ezra Klein's interview about such regulation with Congressman Barney Frank. What Frank has to say matters: he's the chair of the House banking committee and is widely thought to have been one of the sharper players during the worst crisis moments of last fall's panic.

Frank thinks better regulation will get done. He's a great common sense explainer of these matters and he assures us:

Now that things are getting back to normal, we can worry about excess. But I believe we will have regulations in place well before we reach that point -- [another meltdown in an over-amped system].

Frank discounts the raw power of the Wall Street mega-investment banks to block regulation, but he points to the influence of forces that he claims Congresscritters do listen to:

The big banks have been somewhat discredited. That's why the credit card bill went in pretty easily over their objections. I believe reining in derivatives and reducing leverage at high levels will be somewhat easy to do.

What killed the primary-residence bankruptcy bill [cramdown] was not the big banks but the community banks and credit unions. They do have a lot of clout. ... And it's important to note that they're not just powerful because they have money, but because they're in everybody's district, and they're responsible and thoughtful citizens.

I was more than a little taken aback by this assertion.

Is it true? Is Frank expressing a regional perception? -- that is, are there Congressional districts where the local bankers, the local Chamber of Commerce guys, are the core of the political class around which all politics orbits? Perhaps in older suburbs and some rural areas? Or is this idea that local and regional elites matter so much to Congresspeople just a convenient pseudo-democratic (small "d") cultural myth -- something we believe is part of our political culture but which actually doesn't exist?

Where campaigns cost a lot, certainly at the Senate and Presidential level, the really big money from really large interests like multi-national investment banks must be more important than money that local notables can kick in.

But in many Congressional districts, regardless of location, really the only contests that matter are the intra-Party succession contests. Once a Congressperson in these districts is in place, in a safe seat, s/he usually benefits from local political class contributions for the duration of incumbency, regardless of party. In return, the local Congressperson probably listens to the local power brokers most of the time. S/he also meets them at the same public gatherings, sends her children to the same (probably private) schools, and socializes with them. So certainly local bankers have influence in those contexts.

The independent entrepreneur who makes it big, from Horatio Alger through Steve Wozniak and Steve Jobs in their Silicon Valley garage, is a staple of the national myth. There aren't a lot that make a big killing, but most localities have some example of a local success story. So is the local business person who stands out in a community -- even if the "community" is a bedroom exurb to a city, lacking much tradition and any physical center apart from several freeway interchanges -- that "responsible and thoughtful citizen" that Barney Frank is pointing to? It's a little hard to believe in the "clout" of such people.

Meanwhile, it's pretty clear which financial leaders think they ought to have more clout. The Washington Post recently reported that Democrats find themselves hurting for political cash. (Via TAPPED.)

Democratic political committees have seen a decline in their fundraising fortunes this year, a result of complacency among their rank-and-file donors and a de facto boycott by many of their wealthiest givers, who have been put off by the party's harsh rhetoric about big business. ...

The vast majority of those declines were accounted for by the absence of large donors who, strategists say, have shut their checkbooks in part because Democrats have heightened their attacks on the conduct of major financial firms and set their sights on rewriting the laws that regulate their behavior.

Reports like this make it hard to credit Barney Frank's description of who is important to Congresspeople.
Posted by janinsanfran at 12:07 AM