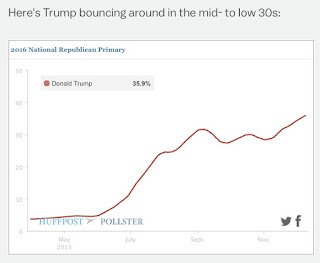 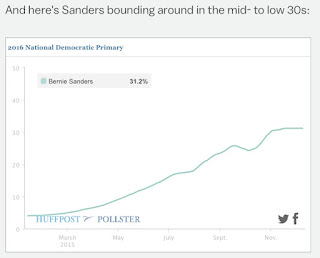 Look at those two representations of polling data. They don't look so different, do they? Both the odious Mr. Trump and the charming Bernie are attracting about one-third of the members of their own party to their campaigns for President.

More of us identify as Democrats than Republicans (even though Dems are somewhat less likely to vote regularly.) That means that our democratic socialist Senator actually probably has more professed supporters than the blustering proto-fascist billionaire.

For Bernie, in what is functionally a two candidate field, having 30 percent plus support amounts to losing badly to Hillary's 66 percent. For Trump in an over-crowded clown car, having the support of one third of Republicans might create a path to the nomination and general election.

But think what this means for the nation's future, if we have one. I'll turn this over to Matthew Yglesias whose charts and thoughts I'm appropriating here:

... in terms of analyzing broad trends in American life, the Sanders phenomenon is probably more significant than Trumpism.

In the short term, that all means that Trump is more relevant to 2016. But the values that Sanders reflects are likely to grow stronger in future cycles, while Trumpism is likely to grow weaker.

Something to hold on to in dark times.
Posted by janinsanfran at 9:20 AM

We were out on the desert today, one of our last days. There was a tour bus full of young black students, not sure from where as the language was one we could not trace but my husband has heard various languages from Africa and he was sure it was one of them. What I thought about later was how the world will see us if Trump should win. I don't even know if Trump is as bad as he is perceived but many who would vote for him will do so for the believe that he is only to them that's good. I don't generally vote based on world image but it cannot be good to be seen as racist, cruel and selfish by much of the world.

I still hope it'll be Bernie on the dem side but we won't really know until the first primaries.