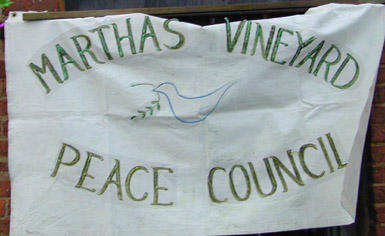 The tiny notice read:
Sunrise Remembrance for the 60th anniversary of Hiroshima Day at 6 a.m. at the Gay Head Light in Aquinnah, sponsored by the Martha's Vineyard Peace Council
I'm always ambivalent about events of this sort. Little gatherings of well-meaning US folks seem so inadequate to mark the world-shaking advent of mass death and planet poisoning in Hiroshima sixty years ago, much less to stop the rising tide of violence and hatred on our contemporary scene. What good can it do for the usual suspects once again to gather to pray, sing, and meditate?

Sixty years after Hiroshima, the Los Angeles Times wants to be sure we know that even in Japan, people are forgetting that peace is precious.

"Only on this day are people enthusiastic about peace — that's it," said Yuki Shibazaki, 17, as she gossiped with friends around the Peace Memorial Museum after the ceremony. Her high school class was supposed to designate two representatives to attend Saturday's ceremony, but there were no volunteers.

"I don't have any clear sense about war or peace," she said. "To be honest, for the locals, it is an inconvenience and annoying to have a ceremony like this."

That sentiment worries Hiroshima survivors, who warn that complacency about the lessons of the atomic bombs make war and even the use of nuclear weapons more likely. 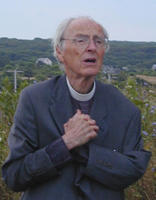 Complacency leads to death, so I go to the remembrance, because it would be worse to be absent. Giving up is not an option; we have no choice but to seek ways to peace (and perhaps, if lucky, to find that peace within ourselves is a prelude to peace in the world.)

Though my political work is seldom among the "peace people," the stalwarts at the Gay Head too are my family. It was a privilege to spend an early hour with them, remembering the unthinkable and knowing that they too work against all odds for the survival of the planet. 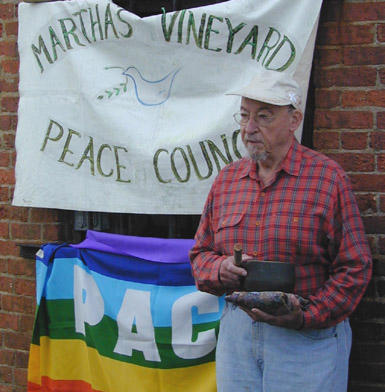 Posted by janinsanfran at 9:46 AM