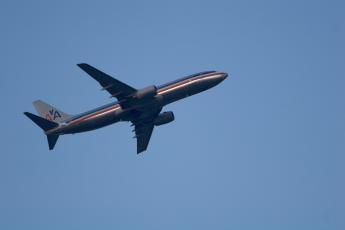 Three air cargo pilots have to wonder whether the Transportation Security Administration's "no fly list," ostensibly a measure to keep terrorists off airplanes, isn’t being used by someone to throw them out of their jobs. Someone mailed "animal or human waste" to ABX Air executives; the three pilots, who worked for ABX Air out of the DHL hub in Cincinnati, were questioned by the FBI about the incident. They were cleared. Nonetheless, somehow their names turned up on the no fly list, according to the Cincinnnati Enquirer.

For most of us who've had a run in with no fly list, the consequences have been delays, or missed flights, or at worst the chilling experience of being detained by police authorities in an airport. (It can get a a lot worse if you are of Middle Eastern or South Asian origin.) But because these guys fly for a living, they are screwed if they can't get themselves off the list.

They find themselves stuck in a Kafkaesque nightmare. Their union, Teamsters Local 1224, is trying to help:

Lynn Nowel, the union's general counsel [said] "It's a problem when you deny someone the ability to make a living without checking it out first. And an even bigger problem was the terrible time we had even finding out why they were on the list and how hard it was to get them off." . . .

The FBI previously acknowledged it was conducting a criminal investigation into the acts, which it said could be covered by domestic terrorism laws because it involved the mailing of potentially biohazardous material.
. . .
TSA spokeswoman Ann Davis also would not discuss specifics about the list, but said that it gets information and recommendations from other agencies, including the FBI. "We trust that when they suggest that someone be placed on the 'no-fly' or 'selectee' list, that they do so for very good reasons," Davis said.

Sure looks like a blacklist to me. "The term implies that someone has been prevented from having legitimate access to something due to the whims or judgments of another." In this case it sure looks like ABX Air has the TSA doing its dirty work; I wonder if the company made any interesting campaign contributions?
Posted by janinsanfran at 9:43 AM