Is voting worth it? 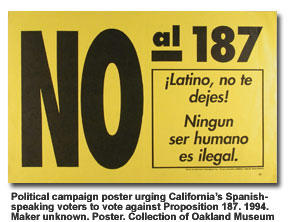 If anyone still thinks that elections are meaningless, they should consider this:

Sponsors of the proposed state constitutional amendment argued that Lockyer -- a Democrat who supports gay rights -- stacked the deck against the measure with an official description that exaggerated and distorted its effect on domestic partners and underplayed its effect on marriage.

All through the 1990s Californians fought a series of right wing, race-baiting backlash initiatives: Former Republican Attorney General Dan Lungren approved those ballot titles. This was what voters saw when casting their ballots. By doing so he gave his rightwing friends a big head start for their measures, since many voters never delve deeper into the thicket of propositions than the titles. Who would oppose reporting "illegal aliens" or vote for "discrimination"? Only someone who knew what the propositions would really do -- and that' education was hard to accomplish for cash strapped opponents.

As the news account notes, Bill Lockyer is a Democrat (and I'll add one from Northern California where survival requires at least a modicum of liberalism.) He is not about to let the right wing frame the debate on its gay marriage measure. Instead, he has used his power to unmask their real agenda of forcing gay people back in the closet.

I contend that mere neutrality from Lockyer in 2003 on Prop. 54, which would have outlawed state collection of racial demographic information, was a huge aid in sinking that bad idea.

It matters a lot who we elect to these anonymous down-ballot jobs. "Too obscure" or "too confusing" to figure these contests out won't cut it.
Posted by janinsanfran at 8:32 PM