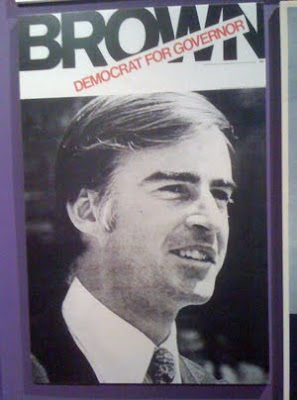 Since it is Labor Day and all, I suppose it would be irresponsible of me not to begin to pay attention to Jerry Brown's campaign.

Oh, he has one? Maybe that is a little unfair. Queen Meg's personal millions spent on ads everywhere may just be making it look like Jerry died and and we didn't notice.

But when he sticks his head out, we get this:

If you're looking for frugality, I'm your man," the California attorney general and former two-term governor said in a meeting with The Chronicle's editorial board. When he was governor from 1975 to 1983, he said, "I vetoed the pay raises for the state employees not once, but twice. I was overridden by 23 Republican votes.

"I called for the two-tier pension system in 1982," added Brown, 72. "Of course, the next four governors didn't do anything. I'm willing to get in the battle."

... Brown, a Democrat who also served as Oakland's mayor from 1999 to 2007, sidestepped questions about his specific plans on the budget, as well as where he stands on the Democratic-controlled Legislature's proposals to resolve the budget impasse, which include raising $1.5 billion by increasing vehicle license fees, $600 million by taxing oil wells and $2 billion by suspending corporate tax breaks Instead, he reiterated his off-repeated stance on revenues: "No new taxes unless the people vote for them," he said.

Earth to Jerry: If that's your attitude, why bother? You are not convincing this progressive that fighting back against an isolated Whitman would be worse for the state than electing you.

The only reason you are still in the race at all is that labor had your back; so kick 'em, huh?

California can only recover its momentum when we tax the people who have money to enable us to carry out policies that create more equality and hence more prosperity. Jerry's father did that and we got the University of California and drained the rest of the country for brains. His son apparently missed out in the gray matter department.
Posted by janinsanfran at 8:39 AM

I'm pulling for Jerry. He's not usually shy of putting his positions out there, so what's the deal this time?

I would instinctively pull for Jerry, though like many pols, he looks more attractive the further away one stands. As a northern Californian for many years, I've seen too much of Jerry to be an enthusiast.

But very especially I can't warm to seeing him kick labor -- labor is the backbone of Democratic electoral campaigns in California. Push them away and a Democratic candidate is simply being delusional and egotistical.

Don't worry. Institutional labor is more delusional than Jerry Brown. They are incapable of being pushed away from the dem who won the party nomination -- no matter whether the candidate mouths warmed over pro-labor platitudes they have no interested (or perhaps ability) to fulfill or they announce their neo-liberal anti-labor politics up front which Jerry seems willing to do this go around to win over the "moderates".

Union members may be discouraged from voting for him. Maybe. But union hacks will ask them to no matter what Jerry says.