No-fly lawsuit settled -- what we learned 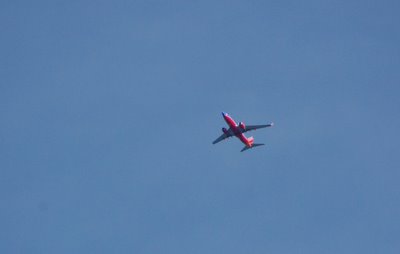 Today you can celebrate that $200,000 of your tax dollars will be paid to the American Civil Liberties Union to help that organization continue to stand up for our freedoms.

The government will compensate the ACLU for attorneys' fees, settling a lawsuit initiated by two San Francisco peace activists who were detained while checking in for a flight three years ago....

The agencies at first balked at supplying any information to the ACLU. But U.S. District Judge Charles Breyer, after privately reviewing secret government data, said the government was making "frivolous claims" about why it could not....

One heavily redacted document says getting on a list is guided by two "primary" principles: Whether various intelligence agencies view an individual as a "potential threat to U.S. civil aviation," and whether the agency requesting a listing has provided enough information to identify the person to be flagged at check-in. Yahoo News-AP

I'm one of those activists and I'm pretty happy with the outcome of a long process. And no, the two of us who pressed the lawsuit don't get a penny.

We weren't looking for money. We just wanted to know why Big Brother was looking over our shoulders. We are glad that as a consequence of our detention in an airport three years ago, and the subsequent court case, everyone found out a little more about how the government is watching us.

There is still a lot we didn't learn, but we hope more information will gradually seep out. We don't really know what makes the government choose to single out a mixed bag of folks including babies, commercial pilots, vets who are "mentally defective", and Teddy Kennedy. The government says they remove names all the time and there is a bureaucratic procedure people can use to try to get delisted. But the TSA will not confirm that any particular individual has been removed. "National security," you know.

One of the documents released during the lawsuit suggested that names on the list might be transmitted to U.S. government agencies all over the world -- a chilling thought, indeed.

We do know the same day the government settled our lawsuit, they also removed a Cape Air pilot from the list. Robert W.G.M. Gray can return to his job after being grounded for months.

From the beginning, we've found it hard to believe that airport "security,"-- the lists, the ID checks, the perfunctory hand luggage searches -- had much to do with actually keeping us safe from terrorist attacks. The 9/11 attacks showed that the attackers were very smart; they could certainly find a way around scatter-shot precautions and aren't likely to use the same tactics twice. The exaggerated security we encounter at airports is largely a Theater of Fear designed to keep us scared out of our wits. Only when not fully in possession of our right minds will we give away our rights to a secretive, arrogant, lawless regime.
Posted by janinsanfran at 12:12 AM

Thank you for fighting back.

Of course the "No Fly" list is a security joke. We have a southern border with hundreds of thousands of people strolling across unseen, yet the government makes a show of taking away nail files in airports.

The last 2-3 time I've flown, I've discovered a billet-doux from the TSA about why they had to open my luggage. I travel light, so I can't imagine why some TSA Neanderthal would see something suspicious amongst my undies, but there you have it.

I am traumatized by recent treatment I received from Aamerica's homelan security office! Maybe I am a spoiled wimp, but I do wish to sue them for calling me a "spy"!

And for asking me to "give up my Iranian passport" so I can easily travel to the US!