Of hostages, journalists and hope 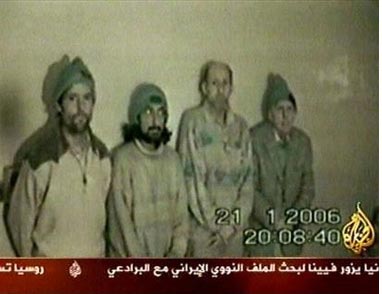 Christian Peacemaker Team (CPT) members, James Loney, Harmeet Singh Sooden, Tom Fox, and Norman Kember, kidnapped in Iraq on November 26 have been shown alive on Al Jazeera. The video made a demand to U.S. and Iraqi authorities to "release all Iraqi prisoners in return of freeing the hostages, otherwise their fate will be death."

At least they apparently are still alive. This is good and hopeful news -- the long silence had seemed to presage a bad end.

This news is an answer to our prayers. We continue to hope and pray for their release.

... James, Harmeet, Norman and Tom are peace workers who have not collaborated with the occupation of Iraq and who have worked for justice for all Iraqis, especially those detained. We continue to believe that what has happened to our teammates is the result of the actions of the U.S. and U.K. governments in their illegal attack on Iraq and the continuing occupation and oppression of its people. We continue to call for justice and human rights for all who are detained in Iraq. The innocent should not suffer in the place of those who have done wrong.

This news comes the same day as new reports that the ACLU has unearthed documents showing the U.S. military took its own hostages, the wives of men they were hoping to seize as "insurgents." There seems to have been just the sort of cowboy mentality at work that we might fear in a guerilla war:

A U.S. lieutenant colonel e-mailed, "What are you guys doing to try to get the husband -- have you tacked a note on the door and challenged him to come get his wife? ... or something more sophisticated, I suspect, from the 'not necessarily the cool guys, but the guys with the cool stuff?'"

A later e-mail stated, "These ladies fought back extremely hard during the original detention. They have shown indications of deceipt (sic) and misinformation."

I guess we should be glad that "our" guys didn't broadcast videos of their captives after "interrogations."

The recently kidnapped Westerners (that we hear about), the CPT four and freelance journalist Jill Carroll, have been people who made a point relating to Iraqis on relatively equal terms, including in Carroll's case learning Arabic. They are quintessential "good people." They have been the focus of an extraordinary outpouring of support: many Muslim and Arab leaders in Iraq, Europe and the U.S. (even current bugaboo Hamas!) have begged for their release. Some thoughts: So where's the hope?

The hope comes, as always, from popular resistance to continuance of violence by the powers that be. Since January 15, a group of folks coming out of the Christian Peacemaker Team orbit have been conducting Shine the Light pilgrimages to key Washington, DC institutions that support the war. They refuse, quietly, but insistently, to let their light be extinguished. For sometimes amusing, sometimes edifying accounts of reactions from workers, army recruiters, and various authorities, see Peace Talk. 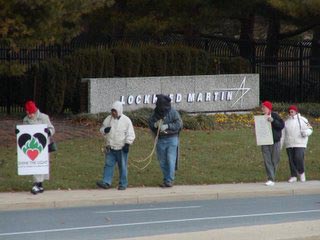 The hooded prisoner was an unexpected sight in suburban Montgomery County.

Posted by janinsanfran at 4:48 PM