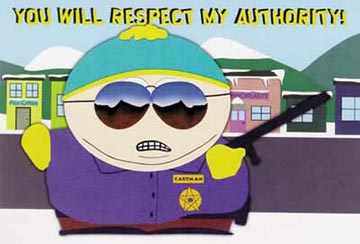 (Part 4 of a series of posts exploring Influence: The Psychology of Persuasion by Robert Cialdini. Part 1; Part 2;Part 3.)

Cialdini summarizes what he is his talking about like this: Concern about how authority works on us is certainly current, given ongoing revelations that we have an administration that encourages law-breaking, violation of civil rights, and torture of perceived enemies.

This author is clearly distressed by the consequences when people follow authority by rote. He describes at length the notorious Milgram experiment which revealed that most randomly selected subjects would "harm" another person if urged on by an authority. He also looks at the case of the train crew that followed an order to mow down protester Brian Willson, cutting off his legs -- and then sued Willson for causing them mental anguish by failing to get out of the way. But as with all the compliance triggers, this one exists because it serves useful social purposes:

Conforming to the dictates of authority figures has always had genuine practical advantages....Early on, these people (for example, parents, teachers) knew more than we did, and we found their advice beneficial....As adults, the same benefits persist for the same reasons, though the authority figures now appear as employers, judges, and government leaders. Because their positions speak of superior access to information and power, it makes great sense to comply with the wishes of properly constituted authorities. It makes so much sense, in fact, that we often do so when it makes no sense at all.

Many of Cialdini's examples of when we comply with authority are much more ordinary than issues of torture or military orders. For example, we are swayed to buy products that carry "a doctor's" endorsement, even if we suspect the pitchman is really an actor or well paid for his opinion. We even accord medical people authority in politics: Bill Frist trades on his status as a physician -- if you look at his Senate website, you'll notice he hangs an "M.D." after his name. Presumably polling says we credit doctors above Majority Leaders.

Progressives appeal to medical authority too. One of the most successful campaigns I've worked on in recent years used the former Surgeon General Dr. C. Everett Koop as our spokesman. For all our complaints about health care, we trust doctors on subjects we don't know much about.

The blogosphere is full of folks who like to think we're immune to following authorities blindly, but I think we could do with some self-examination about how we choose to grant authority to particular people. A personal example: I know I don't know squat about Iraqi society -- until the U.S. decided to screw up the place, I'd barely thought about it. (I try to know about a lot of stuff -- there are practical limits to how much I can consider...yada yada yada.) So I tend to believe what Juan Cole tells me about developments in that unfortunate country. But what if he is wrong? Well, I can hope that someone else who knows something will call him out. And now that he has comments turned on, maybe correctives will turn up there. But mostly I have to monitor a din of opinions around the sphere and hope to notice if something significant starts breaking in. It takes a lot of work to try to avoid just going along once I accept the premise that someone is an authority.

Cialdini's proposed counterweight to the authority compliance trigger is simple: we need to learn to ask ourselves: "is this authority truly an expert?" That would often weed out actors pitching junk and maybe even a Majority Leader pontificating about judges.

The professor then suggests a second question, "how truthful can we expect the expert to be here?" Is a compliance professional/salesman/expert/authority aiming to trick us? The necessity to ask this question constantly is yet another reason more and more us approach community interaction cautiously or even infrequently.
Posted by janinsanfran at 12:45 PM