Surrounded by the "Weapons of Influence" 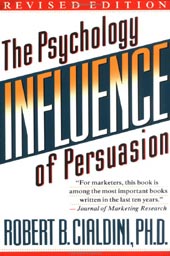 Last fall, while I was working on an advocacy campaign, one of the guys who did media suggested that I read this book. "It will change how you think about everything," he insisted. To my surprise, he is right.

Cialdini outlines how human beings usually respond, without thought, to an array of triggers -- and provides many examples of how these triggers are used by marketers, con men and political advocates. He calls the triggers "weapons of influence." I am going to lay out Cialdini's thesis and make a few observations here. Then I want to dig more in subsequent posts into the political application of some of the "weapons" he describes.

Influence is not a new book; the first edition came out in 1984, and it has been updated twice since. Because of its age, some examples feel slightly outdated. But thinking its argument is naïve would be a mistake.

Cialdini, a professor of psychology at Arizona State University, took up the study of weapons of influence because he is a natural patsy.

For as long as I can recall, I've been an easy mark for the pitches of peddlers, fund-raisers, and operators of one sort or another. True, only some of these people had dishonorable motives. The others -- representatives of certain charitable agencies, for instance -- have had the best of intentions. ...[T]his long-standing status as sucker accounts for my interest in compliance: just what are the factors that cause one person to say yes to another person?

And so, like the good academic that he is, he did some research and created a matrix of categories to explain why we can be gulled into doing things we might not choose if we thought about it.

He first explains both animals and humans do have automatic responses to triggering events or sounds that can seem pretty irrational. For example, a male robin defending its territory will attack an inanimate clump of robin-redbreast feathers. However, he will ignore a full-size, life-like, stuffed robin, if the breast feathers are replaced by ones that are not red. A very precise trigger is required to set off the behavior; and, if the trigger is present, the behavior follows, even though there is not even a facsimile of a bird.

We humans follow similar patterns. Cialdini describes an experiment in which students were asked to try to cut into a line at a photocopy machine. If they simply asked to cut ahead with no reason given, they were accommodated 60 percent of the time. If they asked to cut in "because I am in a rush," they got a "yes" 94 percent of the time. But, incredibly, if they asked to cut in "because I have to make some copies," they got agreement 93 percent of the time. That is, the magic word was "because" -- the reason given did not have to be even semi-rational. Clearly some kind of conditioned response had been triggered. (Cialidini calls these occasions of compliance click, whirr! moments, referring to the sounds of a tape deck. Since tape decks are increasingly rare, I'm going to simply refer to them as compliance triggers.)

When we encounter a compliance trigger, we will probably do what we are conditioned to do without thinking about it. This is not a bad thing. We developed these triggers because they serve useful social functions. Mostly, they actually help us move through the day more smoothly than if we had to think about all our actions.

You and I exist in an extraordinarily complicated stimulus environment, easily the most rapidly moving and complex that has ever existed on this planet. To deal with it, we need shortcuts. ... Without [shortcuts] we would stand frozen -- cataloging, appraising, and calibrating -- as the time for action sped by and away.

Obviously people who want to influence our behavior study and use compliance triggers constantly. Those who use them well get an additional benefit:

Even the victims themselves tend to see their compliance as determined by the action of natural forces rather than by the designs of the person who profits from that compliance.

Posted by janinsanfran at 5:56 PM

This is pretty much obvious stuff that everyone knows. Common sense. Nothing more than that. You talk like everyone is exposed to these tricks like they have to buy this book to learn how to prevent them. People are smart, they comprehend more than just one word like "because" in a sentence.

I don't think it's so obvious for an ordinary person. We don't realise how much a stupid smile can influence our decision of purchasing a car. I think the book helps to understand yourself. And don't tell me that you don't react to all the tricks mentioned- you have to follow them, unless you were brought up by the wolves. :P lol

It's a very good book and I really enjoyed reading your summary of it. Particularly applying the tools of influence to a political situation...

I had a pleasant surprise in reading your article as it had a very entertaining feel to it.