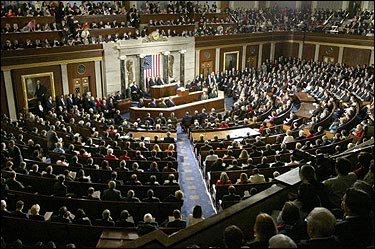 The "State of the Union" speech is a ritual I don't look forward to. Every year the same script -- a big talking heads' build up, thorough leaking of contents (are these trial balloons to see what catches on?), Presidential entrance with amiable greetings to Congresspeople he distains the rest of the year, a sea of dark suited old white guys with a tiny number of women and non-whites mixed in, predictable applause, shots of carefully placed celebrities in the galleries, vast self-congratulation -- and then they all go back to fuddling the business of the nation as usual. Does anyone care?

I asked how many actually pay attention on The Next Hurrah this morning and DemfromCT was kind enough to point me to an answer: the WaPo reported that in 2005 "about 38 million people watched President Bush's State of the Union address ... across four broadcast and three cable networks -- his worst SOTU [share] ever." That is a lot of people, though not overwhelming. For example, it is about 3 million more than watched American Idol or the NFC football championships last week (and those programs were only on one channel.) On the other hand, next Sunday more than 130 million people plan to watch the Super Bowl. According to the Harris poll website, about one third of U.S. adults say they'll look in on Bush's speech.

The SOTU fulfils a Constitutional requirement that:

The President shall from time to time give to Congress information of the State of the Union and recommend to their Consideration such measures as he shall judge necessary and expedient." (Article II, Section 3)

Come to think of it, given the reluctance of this Administration to consult Congress at all, maybe it is a good thing that tradition has made this snippet of law into an annual custom.

Of course, the President is no longer really talking to Congress; he's pitching his program to that large, but not enormous, TV audience. The set up plays to Bush's preferences: a carefully screened audience, two transparent teleprompters, a set script, no questions. But I still have to wonder, does anyone really care? According to that Harris poll, only 47 percent of Republicans plan to watch.

I suspect in a week we'll have forgotten about the SOTU except possibly GWB's impending proposal for health savings accounts. That may limp on for a month or so. The big concerns of the nation are not the stuff of well-spun set pieces; they are intractible realities -- war, our prosperity or lack of it, the competence of government to do its job. The Administration will continue to barks its shins on reality. No, it can't just make it up.
Posted by janinsanfran at 10:13 PM