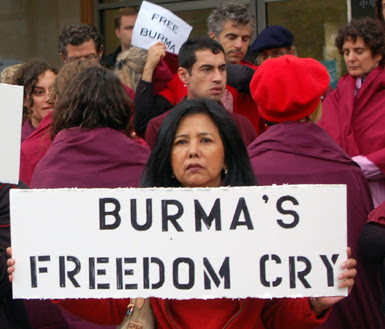 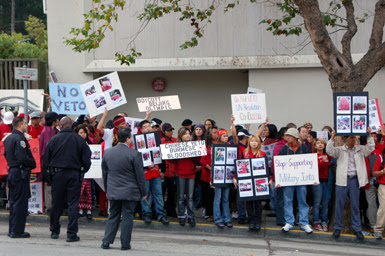 Several hundred people, watched by the SFPD, crowded on the sidewalks on Geary Blvd. 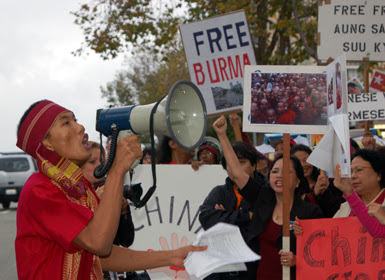 Leaders shouted a mix of democracy slogans and religious chanting. 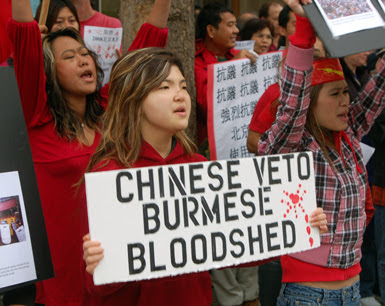 Protesters hold China partially responsible for the repression currently taking place in Burma. China and Russia have threatened to veto any UN action against the ruling Burmese military. 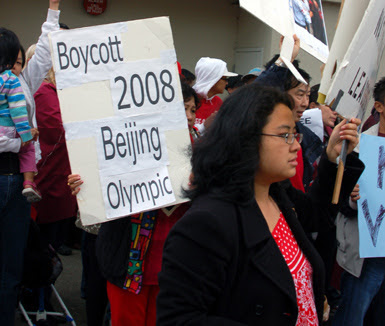 Many hope Chinese pride in the upcoming Beijing Olympics can be used to leverage more action on behalf of the Burmese people. 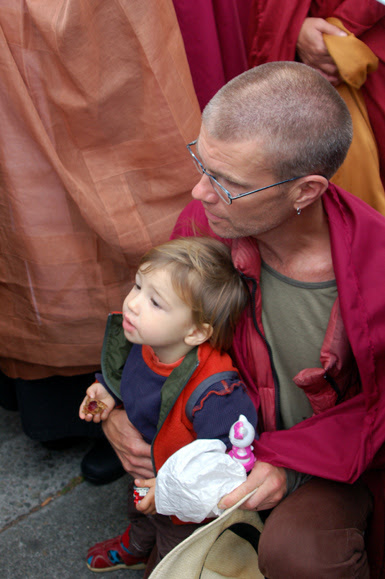 The struggle is long. Gotta start young.
***
Because of past colonial ties, the Brits seem to have faster, better stories on Burma than U.S. media. To keep up-to-date over the next few days, try Faith in Society and Newsdesk Special: burma. The military has cut off most internet access, but twitters are still getting through.

UPDATE: Sunday, Sept. 30:BBC Correspondent Andrew Harding reports from Bangkok where he has been working the phones to reach his Burmese contacts:

After 20 tries, I got through to the home of a man who has spent a decade in jail for criticising the regime. He now lives in a dark, thread-bare house in the suburbs.

In precise, detached language he explained that a military response would soon be forthcoming.

"We can only hope", he said, "they will show restraint".

I thought back to a meeting I had at a monastery nearby, and the calm, resigned voice of an old monk.

And now, despair is creeping into almost every phone call.

One man today was telling me how he had just come home on a bus full of people in tears. Everyone was talking about the way the soldiers had attacked the monks dragging them out of their monasteries.

There is so much anger in Burma right now, particularly about the brutal treatment of the monks.

But, as the crackdown continues, Rangoon seems to be sinking once again beneath its familiar, suffocating blanket of fear.

Posted by janinsanfran at 4:38 PM

Sigh. Another heart-breaking mess! I wish I had a magic wand. I'd wave it and we'd all learn to live together and eradicate the world's ills.

Free Burma!
International Bloggers' Day for Burma on the 4th of October

International bloggers are preparing an action to support the peaceful revolution in Burma. We want to set a sign for freedom and show our sympathy for these people who are fighting their cruel regime without weapons. These Bloggers are planning to refrain from posting to their blogs on October 4 and just put up one Banner then, underlined with the words „Free Burma!“.