The making of one Minuteman 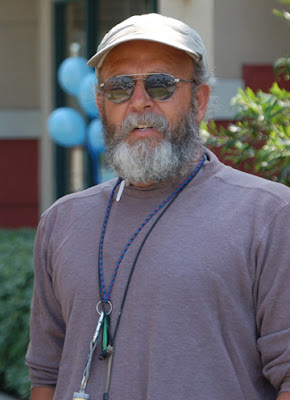 When the Raging Grannies theatrically exorcised "hate" from their town at the site of an announced anti-immigrant Minuteman demonstration, they found only one self-proclaimed Minuteman. Story here.

This guy was not much of a hater. In fact, I'd call him amiable. In many ways he was a normal, northern California white 40-50 year old blue-collar guy. Perhaps better informed than many. He knew that the decline of the unions began with Reagan firing the PATCO strikers; he hates the Iraq war and thinks George W. Bush is the worst President ever. That is, he fits right in, except he is a Minuteman.

Here's what he had to say, a composite of his conversation with the very polite Grannies who surrounded him and a talk the two of us had afterward. (I've recreated this conversation from memory and quick notes; I hope and believe it is accurate, but it was not recorded.)

You want to know why I'm out here? It's this simple. When my union, the Carpenters' Union, gave up residential [construction], my life was destroyed.

I was making $40 an hour. Now I make $20.88 an hour. Are you willing to give up half of everything you earn to these people for the rest of your life? Are you?

But it is worse than that. I used to love my work. I built roofs. That's technical; you have to do the math and calculate and get it right. I was thinking all the time. I'd have a crew of guys. And we'd bid a roof on one of these luxury houses, and I'd go out there with a couple of apprentices, because you have to learn your skills to do this work, and we'd knock it off and we'd make some money.

But then the union gave up residential construction. The developers on those jobs get a bunch of illegals and they throw up crummy houses real fast and don't have to pay the illegals hardly anything.

Meanwhile, all I've done for 13 years is bang away on those boxes you see in developments. I haven't had an apprentice for 13 years; sure, new hires come in, but they just set them tying steel or setting [framing] plates for four years. They don't learn how to do anything.

For the roofs, they bring in prefabricated trusses from Canada. Nobody does any thinking anymore. And the truck drivers -- they are Sikhs with those headdresses.

I'm not a racist. My partner I have worked with for 13 years is a Latino.

But those illegals, they are just taking our jobs. The union business agent came in the other day. I was sitting at lunch with the white guys, the old time guys, and he read off a list -- he says, "you got 3 guys using the same name on this job." That is, he is tipping off the foreman some of these guys are using phony social security numbers they stole somewhere. So the job should clean it up or maybe there might be some trouble.

It is all so rotten. I am just hanging on a few more years til I can quit and get my union pension.

[My question: how come there is any union housing built still? The way you tell it, obviously all the developers could build more cheaply without union labor?]

That's a good question. Don't know. Oh, maybe it is because the developers on these big tracts get some money from the state and then there are rules they have to use union labor. At least I have a job until I can get out of this.

But I get so mad at those politicians who say that no Americans will do this work. I love my job and so did a lot of guys. And no, you can't convert me.

Let's unpack what our "nice Minuteman" has to say. Coming from a background in working in construction myself, I hear a lot of home truths and some pretty garden variety misapprehensions and conventional racism here.

This guy has been hammered by two realities in the contemporary U.S. that trashed his expectations in life. He thought he was entitled to a path that is gone.

The first blow was that during his lifetime, construction has been "rationalized" and deskilled. If business can get things done, even shoddily, by organizing production and maintenance in ways that don't require skills, it will. This is cheaper, more profitable. Most of us see this more commonly in arenas outside construction. We see that cash registers don't have numbers any more, they have labels for menu items or even just icons to punch in what you bought. Heck, more and more stores have scanning equipment for your groceries so they don't even need to pay some one to punch in your purchases.

Similarly very few car problems actually require human diagnosis and skill to repair and maintain. Diagnosis is done by a computer; repair consists of swapping out parts. The person doing the job is still called a "mechanic" but neither years of experience nor creative thought is required of the worker.

Building houses has undergone a similar transformation in our Minuteman's lifetime. Builders always hired a good number of "construction gorillas," young males who would work their butts off doing grunt work on foundations and framing. But, for the smart and imaginative, there were advancement paths to parts of the jobs that used skill and experience. Our Minuteman was following one of those paths, and loving it, when developers were able to shut it down and replace skill with mass-produced designs and cheap labor. Building houses no longer requires or values brains. What a blow to a proud craftsman!

And the rest of us need to understand that if houses were built in ways that required more skill, housing would cost even more than it does today.

The second blow for this guy was that, though he's still in a union, it couldn't defend his wages and life path. It's true the Carpenters Union gave up on smaller luxury construction projects where skill still had commanded a premium wage. First the developers got givebacks, then, by the mid-90s, they got away with doing without union crews altogether. Whether this happened because the unions were hampered by bad labor laws, or there was union corruption, or unions just had too many fires to fight at once, the result was the end of the good jobs that gave this guy an opportunity to do work he was proud of.

On top of these real blows to his pride and his standard of living, our nice Minuteman does participate in the conventional, low level, everyday racism of white folks in this society. That is, he honestly does not hate anyone he knows or works with. He's not at all vicious. But he simply assumes he and his kind have a first right to whatever goodies the society has to offer. He suspects that any "other" person must be cheating to get treatment equal to his. That's just normal racism, something just about every white person shares in this country, unless they've worked hard to eradicate it.
***
Most Minutemen, if I'm to believe the Southern Poverty Law Center and anti-hate journalist David Neiwert -- and I do believe them -- aren't nearly such smart, nice people as our guy in Campbell. But progressives need to understand that the experiences of these folks point to a series of failures by progressives that will haunt us until we do something about them.
***
The Raging Grannies would want me to point out that this one "nice" Minuteman is not representative of the ones they've met at these protests. A Granny writes, this is

NOT true for the other Minutemen who have shown up in the past! One asked a granny "how would you enjoy being anally raped by a Mexican."

Those kind of attitudes are probably more much representative of many Minutemen.

Posted by janinsanfran at 7:27 PM

The most poignant part of that post for me was: "And we'd bid a roof on one of these luxury houses, and I'd go out there with a couple of apprentices, because you have to learn your skills to do this work, and we'd knock it off and we'd make some money. But then the union gave up residential construction...I haven't had an apprentice for 13 years; sure, new hires come in, but they just set them tying steel or setting [framing] plates for four years. They don't learn how to do anything."

We're not passing on knowledge in our culture right now, and as Jane Jacobs pointed out in her last, scary book, that's tragic for a culture. And I know what the old roofer is talking about because my dad was a roofing contractor and I was taken out as an apprentice as a teenager in the 1960s. The laborers in Central California at the time were a weird, combustible mix of racist Okies (the Minuteman types), Mexicans both legal and not, and the young from both groups. At least there was knowledge being passed on. From the sound of it, that no longer exists, and it's an awful indictment of capitalism/consumerism at its most rapacious, which is what we are living through for the moment.

I have heard the exact same story as well, only with a member of the IBEW (electric workers). Electricians have been hammered in exactly the same way.

This is a nicely done unpacking of the situation -- there are clearly many problems in addition to the one of entitlement and racism present. And these other problems cannot be ignored and dumped in focusing only on the racist aspects, either.

sfmike also raises an excellent point about the loss of knowledge and skills. We are experiencing a 'brain drain' in many ways in this country.