Street theater in the California 'burbs

Well, actually the location was at the Campbell-San Jose border, so the place counts as an urban area. But to a city dweller, it seems an undistinguished agglomeration of wide streets, hostile to pedestrians, and consisting mostly of malls populated by cookie-cutter chain stores. Here the Raging Grannies of the Peninsula turned out yesterday in force to greet any Minutemen who actually showed for their own demonstration against immigration. In reality there was only one Minuteman and a most amiable one at that. I'll muse on his story in another post. These women weren't about to let all those cars whip by without noticing them! 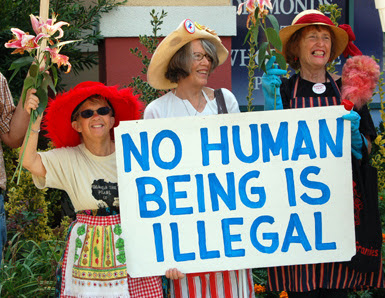 And they understand they can create their own environment, if they are willing to be outrageous enough! 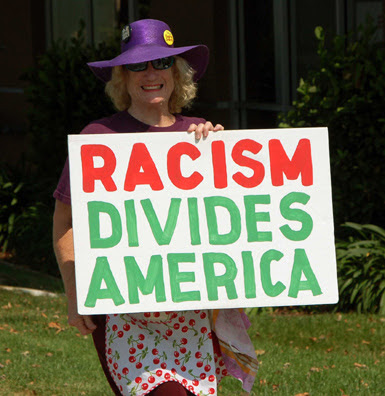 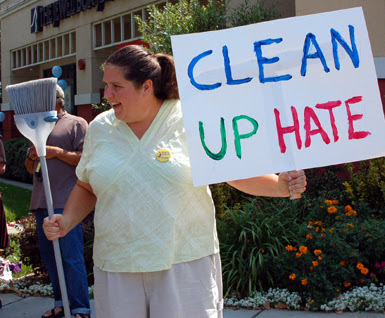 The aim was to "clean up hate," to exorcise the corner where the Minutemen would have gathered (if there had been more than one.) 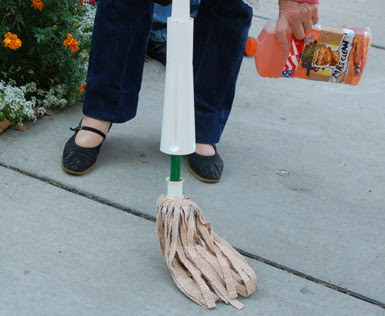 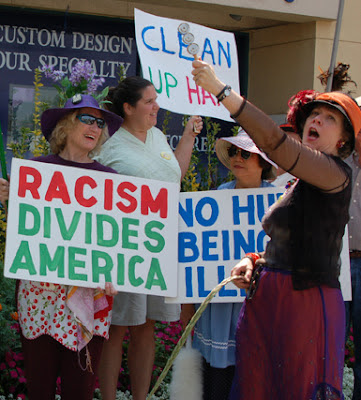 Wands were waved; songs were sung. 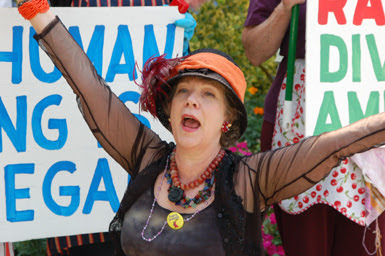 Meanwhile supporters actually engaged a few equally out of place passersby in conversation.

When I attend events like this, I make it a practice to park some slight distance away and approach on foot. I see the gathering more as others do that way. At this one, I parked away from the gleaming Whole Foods plaza, in a seedy strip mall.

Returning to my car, I was reminded that massive immigration is bringing enormous disruptions and opportunities to people who live pretty much under the radar of both the one Minuteman and the Grannies. 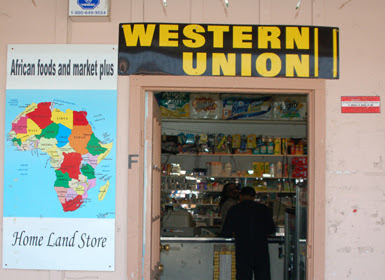 Opposite where I'd parked, some people buy their familiar foods and send their remittances to families far away. Many worlds meet at the border of San Jose and Campbell, California.
Posted by janinsanfran at 9:19 AM

This is wonderful! Thank you for all the pictures.

Thanks for a City Mouse's view of Raging Grannies in the suburbs....from your friends, the Raging Granny Country Mice

What a hoot! Grannies protesting against Minutemen! If that just doesn't take the cake for the MOST Stupid protest I have ever heard!

I guess these grannies just don't understand what it means to break the law and cross into their country! Maybe they should invite them to their homes to live, god knows CA has enough of the ILLEGALS to fill their homes!

What out of touch people, how sad. Maybe when CA is over run MORE with illegals or when one of there grand kids gets hurt by one, just MAYBE then they will wake up and face reality!

What a shame, they try to place that old race card again; all I can say is maybe just too much tree hugging in this town going on!

It is true, no human being is illegal grannies, but those people who enter YOUR country without doing it the RIGHT way, ARE ILLEGAL, and THAT IS THE LAW, like it or not.

Maybe a better protest Grannies would be for you to protest against the TONS of trash left behing at the CA border by illegals! It should be a concern for your group if you care about the environment! It is getting destroyed at the CA border by ILLEGALS crossing into CA with NO respect for our fine state! Now that is a cause I would gladley help support your effort! But to protest agains the MM, really...Americans doing the job to protect you, your family, your grand kids! No way.....sorry, lost cause the MM are fine upstanding American citizens, you need to meet them one on one!
I guarantee they will change your minds.

wow, you drew in some trolls, jan! That means they are scared of more people realizing that they are divisive and xenophobic. Thanks for sharing the pix, I'm glad to see more solidarity in the streets. paz

What a disgraceful display from grown American(?) women!
I'm a 57 year old Grandmother and even MY Grandmother didn't dress like that!
Apparently you don't have any little Grand Baby girls to protect against these illegal Mexican pedophiles.
God help you and your Grandchildren. You are fighting against their future, do you understand that?

"It should be a concern for your group if you care about the environment! It is getting destroyed at the CA border by ILLEGALS crossing into CA with NO respect for our fine state! Now that is a cause I would gladley help support your effort!"

I agree with noopenborders. Do something useful like protect this country instead of fighting against it.
http://www.snopes.com/photos/politics/restarea.asp

San Diego Police officials say they detained eight undocumented immigrants today after the suspects allegedly stole emergency supplies for evacuees at Qualcomm Stadium. KPBS reporter Amita Sharma has more.
Authorities say evacuees at Qualcomm Stadium told police they noticed a group of people loading supplies onto a truck and driving away. San Diego Police Spokeswoman Monica Munoz says witnesses saw the group return three times to pick up supplies.
Munoz: What they were doing was taking those supplies and selling them so what we did was detain those individuals and spoke to them and they told us they were undocumented and what exactly they were doing so we turned them over to the Border Patrol.
Munoz says four of the eight people taken into custody were released. She said she did not know where the group resold the items, nor to whom.
(Amita Sharma, KPBS News.)