It is hard to believe that the U.S. invasion of Iraq could have any semi-positive by-products -- but perhaps I witnessed such a thing last night. This war has become so obviously catastrophic and so contrary to the interests of the vast majority of us, that "realist" elites are not only expressing some opposition to the war itself, but also opening up a topic long denied public airing: the stranglehold the Israel lobby exercises on U.S. foreign policies and politicians of both parties. 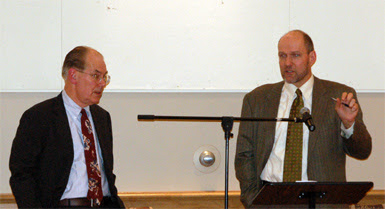 John Mearsheimer, political science professor at the University of Chicago, and Stephen Walt, academic dean of the Kennedy School of Government at Harvard, seem to be conventional academic alpha males. These kinds of figures don't subject themselves lightly to loud, well-organized denunciations by advocacy groups. Former President Jimmy Carter opened the way by publishing Palestine: Peace Not Apartheid. Mearsheimer and Walt followed with an article in the London Review of Books, a response to critics, and now a book, The Israel Lobby and U.S. Foreign Policy. Last night the two authors spoke at a meeting in Berkeley co-sponsored by Codys Books and Tikkun.

These two are not peddling anything very radical. Here is some of what they said, from my notes; quotation marks indicate I wrote down the words verbatim.

The Israel lobby is an interest group like any other that tries to influence policy. There is nothing nefarious about their activities; this is what interest groups do. The lobby is not all Jewish; in addition to many Jewish organizations, it is also home to many Christian Zionists.

The United States' unwavering support for Israel against the Palestinians "makes it harder, not easier, to address the problems of the Middle East." For the United States, "Israel is a strategic liability." (Walt)

The lobby is very good at its project of contributing to friendly candidates and pushing legislators to get policies it wants. "Everybody in Congress knows you are playing with fire if you question U.S. support for Israel." (Walt)

Charges of anti-Semitism against critics of the lobby serve to distract from real policy discussions, discourage advocates of other policies, and marginalize those who try to raise criticisms.

"The lobby has pushed U.S. policies in the Middle East into forms that are not in U.S. interests." (Mearsheimer)

It is wrong to claim that most Arabs don't care about the Palestinians. Anger about Israel's treatment of the Palestinians fuels terrorism in Israel and against the United States.

The Iraq war is one of the greatest strategic blunders in U.S. history. The Israel lobby was one (among several) of the authors of that war. Israel has wanted to see the U.S. attack Iran.

The United States should treat Israel like a normal country, not supporting it unless it is in U.S. interests to do so.

The United States should push for a just peace between Palestinians and Israel along the lines of Israel giving up the settlements in occupied Palestine and returning to 1967 borders.

Since this talk was in Berkeley, several questions came at these authors from the left: just what are U.S. "national interests" and are those the same as the worlds peoples' interests? M&W were quite clear on what they consider "U.S. national interests." When challenged about why Israel and India, countries which never signed the Nuclear Non-Proliferation Treaty, should be treated as good guys, while Iran which did sign and has not been proven to be in violation is a pariah, they allowed as how the United States was indeed inconsistent about nuclear weapons.

These are not radicals or even liberals -- yet they have crossed a line and are getting the full pushback reserved for people the Israel lobby designates as enemies.
***
People often ask, is the Israel lobby really so influential? Aren't there lots of crazy, racist warhawks in Washington that have gotten us into the Iraq mess and our generally hostile posture toward the Islamic world? Yes, there are -- and the Israel lobby is nonetheless a real force that needs to be talked about. Here's what M.J. Rosenberg at Talking Points Memo Cafe says about the pressure of the lobby in D.C.:

I spent almost 20 years as a Congressional aide and can testify from repeated personal experience that Senators and House Members are under constant pressure to support status quo policies on Israel. It is no accident that Members of Congress compete over who can place more conditions on aid to the Palestinians, who will be first to denounce the Saudi peace plan, and who will win the right to be the primary sponsor of the next pointless Palestinian-bashing resolution.

Nor is it an accident that there is never a serious Congressional debate about policy toward Israel and the Palestinians. Moreover, every President knows that any serious effort to push for an Israeli-Palestinian agreement based on compromise by both sides will produce loud (sometimes hysterical) opposition from the Hill.

And these pressures reach down to the local level. I've worked for politicians running for offices no more genuinely important than dog catcher -- and to a man or woman, they believed that they must never utter the slightest question about Israel's virtue even privately or they would be opposed by influential people in their communities who made it their business to police the most local of politicians.

By stifling debate, people who believe they are acting as friends of Israel are actually storing up resentment in many quarters. In particular, young people, many of color, who will be the backbone of the future Democratic Party, don't get it. Many don't know about or don't feel very responsible for the Holocaust -- wasn't that something way back in history that Europeans did? If they know there are Palestinians, they identify with them more easily than a group of Europeans who dropped themselves on land lived in by Arabs. The idea of Jews as people oppressed and at risk simply makes no intuitive sense to them when Israel has the nukes.

The San Francisco Mission District has recently seen a round of this. An anti-gang arts organization painted a mural that included one segment showing Palestinians busting through a wall -- alongside slogans about self-determination and breaking down borders. Here in immigrant San Francisco, the parallels (accurate or not) between Israel's Wall and the U.S. border wall seem to many so obvious as to be almost not worth mentioning. But the Jewish Community Relations Council went ballistic; can't have such images here! Supporters of the youth, including anti-Zionist Jews, organized in support. Finally the youth agreed to compromise:

...the supporting organization had its funding stalled and agreed to alter the controversial image. ...

The controversy ended up pitting some members of The City’s Jewish community against each other, with some saying the images were appropriate. HOMEY, the organization that received a city grant to create two murals, said the mural was meant to unite the Mission district. Members of the Art Commission simply said the work did what it was supposed to — start a dialogue. 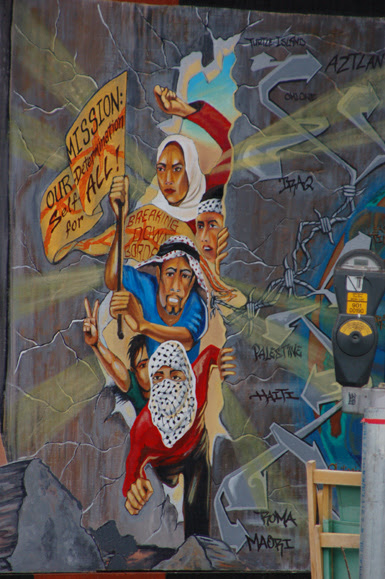 Posted by janinsanfran at 4:06 PM

The “Why Would the U.S. Attack Iran” website - http://www.whyattackiran.com/ - has been updated to represent the current government.

There is not the slightest actual evidence that the Iranian nuclear program has anything to do with creating nuclear weapons [1] and even if it did have a weapons program it would pose no threat to the United States [2]. Nevertheless, the United States has been constantly and deliberately misrepresenting these realities [3] in order to create the false impression that there is some valid reason for us to attack Iran.

So why is the political leadership of the United States falsifying evidence to justify a war against Iran, a war that would make the current war in Iraq look like a cakewalk [4]?

Although the vast majority of Americans are opposed to a U.S. attack on Iran [6] – a fact that has been a problem for many leaders of the Israel Lobby [7] – roughly 71% of Israelis actively support the idea of the U.S. attacking Iran [8]. The “Why Would the U.S. Attack Iran?” website - http://www.whyattackiran.com/ - shows this in detail, illustrating the current leadership (President, Vice-President, Secretary of State, Senate Majority Leader, Senate Minority Leader, Speaker of the House, House Majority Leader, and House Minority Leader) standing before AIPAC [9] declaring their willingness to go to war against Iran on behalf of Israel. Further, recent news stories – primarily from pro-Israel sources – are listed on the left side of the site clearly illustrating the issue. There is no mystery or conspiracy about the fact that the pro-Israel lobby is leading the charge for war on Iran, it is all quite out in the open and freely admitted.

To learn more about the push for war against Iran and why, please visit the “Why Would the U.S. Attack Iran?” website at: http://www.whyattackiran.com/ If you find it useful, please be sure to pass it along to others.

[5] Quote given in context of Iraq, not Iran, but holds true in both cases. Philip Zelikow, former member of the President's Foreign Intelligence Advisory Board and executive director of the 9/11 Commission. Statement made at the University of Virginia on Sep. 10, 2002 http://ipsnews.net/interna.asp?idnews=23083

[6] For a collection of recent polls, see: PollingReport.Com http://www.pollingreport.com/iran.htm