Are we getting better yet? 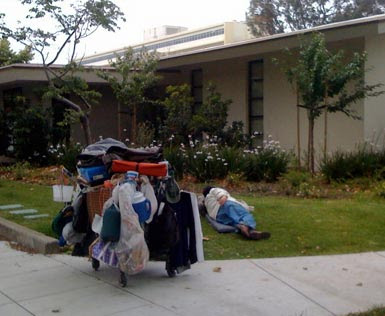 The Dow soared over 9000 for the first time this year today; and this gent had parked his home by the local library.

The state is cutting everything, especially education, aid to the poor, parks and cities and counties. This budget is so bad that even state Democratic Party Chair John Burton is rallying grassroots activists against parts of the deal legislative leaders from his own party cut with Gov. Arnold.

These atrocious budgets happen because the voters of this state were conned by right wing initiative mongers into passing a requirement for a 2/3 vote in the legislature to pass a budget -- and into imposing short term limits that guarantee that Sacramento pols are so busy looking for their next jump among the political musical chairs they never do the state's business.

This is just fine with state Republicans -- they refuse to be taxed for the common good and apparently think they'll be able to buy individual solutions as the state burns. They may be wrong as climate change dries the place up.

California needs democracy -- majority rule tempered by legal process -- restored. For that matter, watching the healthcare runaround in Washington, maybe the whole country needs democracy restoration. Why should a few people make megaprofits while most of us have to scrape by?
Posted by janinsanfran at 4:17 PM

I've asked that question 100 times. I'm not into the idea that everyone should everything. However, it shouldn't be so damned hard for those in the lower brackets.

Amen and amen! Talk about shooting yourself in your foot; the voters who were gulled into passing that stupid piece of legislation should be constantly reminded of their foolishness.