There's nothing "natural" about the "free" market 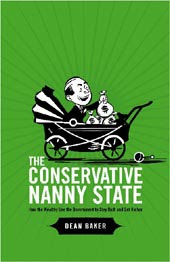 You have to like a guy who practices what he preaches. Dean Baker is a macroeconomist who abhors the success that conservatives have had mystifying most of us in order to shovel unearned benefits to the wealthy. Their stratagem? They insist that any number of economic arrangements are facts of nature, the result of the operation of the "free market." In fact many seemingly "free market-based" practices are the product of political choices that help determine who wins and who loses.

The Conservative Nanny State: How the Wealthy Use the Government to Stay Rich and Get Richer rips into how immigration policy creates shortages of "knowledge workers," including economists, thereby increasing some people's pay, while ensuring an oversupply of unskilled dishwashers and hotel maids who compete with each other, keeping wages down.

Issued back in 2006, Baker was right on top of how CEOs, by packing corporate boards with their friends and counting on stockholders to sell rather than fight, ensured outlandish pay packages for themselves. They are not rewarded for corporate success; their pay depends on gaming a completely "unnatural" system.

Baker also deconstructs the political gains the right gets from coddling weak small businesses that, though numerous, add little to the well-being of most of us. And he has a great chapter on how they've managed to jigger the tax laws to encourage tax evasion by the rich, while auditing close to 20 percent of low income workers who got back a maximum of $4000 from the Earned Income Tax Credit.

Baker digs into the functioning of patents and copyrights. He describes these as residues of the medieval guild system. Then he proposes alternative ways of encouraging and rewarding research, creativity and invention without the current mega-profits that pharmaceutical companies get for designing copycat drugs or the lawsuits the entertainment industry brings against internet file sharing. And he has practiced what he preaches: The Conservative Nanny State is available for free as a .pdf download at the link -- and even as a free audiobook at Audible.com, a commercial vendor. I assume that Professor Baker got a grant from somewhere to support this writing; that method of rewarding an author is no less natural than the system we're accustomed to.

Check it out. It's an easy, if disturbing read.
Posted by janinsanfran at 12:05 AM