Yes we did -- at General Convention 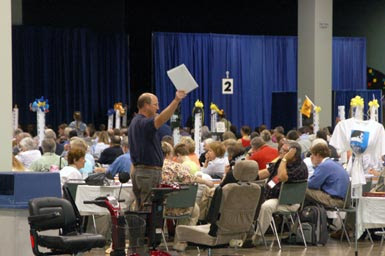 We're on the road home today, driving the long, hot freeway I-5 between Anaheim and San Francisco. If I do more blogging than this entry, something is wrong.

The General Convention of the Episcopal Church has concluded. This mainstream religious institution has moved into a new place that situates its ponderous body well within the same current of change that swept in a new President last November. And it has done so through its own idiosyncratic, legitimating processes -- this protracted, enormous legislative convening. I'll write more about that in future days.

Today, just some excerpts from various reports. From Integrity, the LGBT advocacy outfit I've been working for:

Thirty three years after promising a "full and equal claim" to the gay and lesbian baptized, the Episcopal Church has affirmed equal access to ordination processes for all orders of ministry for all the baptized, has approved a broad local option for the blessings of our relationships, and has called the church to work together toward common liturgical expressions of those blessings.

Yes, it was a 33 year campaign. That's the kind of disciplined effort and devotion that real change requires of us. Many brave, determined people built the foundation on which this year's achievements stand.

Yet another set of past "outsiders" jumped into the action during this Convention -- and made their presences felt:

"It was a true privilege to participate in the legislative process of this Church, to bear witness to transgender lives and experiences, and to urge the Episcopal Church to fully include and to stand in solidarity with us," commented the Rev. Dr. Cameron Partridge, a member of TransEpiscopal and Integrity USA. "I am thrilled to be able to say that the General Convention voted overwhelmingly to put the Episcopal Church on record in support of such legislation as the Matthew Shepherd Hate Crimes Act and the Employment Nondiscrimination Act, and analogous efforts at municipal and state levels. But I am even more moved to say how many people spontaneously shared with us how their eyes have been opened, their hearts turned, by our presence and stories here. To have someone stop me in a coffee line to say, 'I had never thought about this issue before, and I’m going to take what I have learned here and share it with my little congregation in the Ozarks' means more than I can say."

And this Convention wasn't just about sexual orientation and gender (though that sure covers a lot of ground.) The Episcopal Church put itself solidly in support of such causes as single-payer health care, labor law reform that would make the rules fairer for workers, and even decided it needed to make sure its own lay employees are eligible for pensions! A long time activist with the Episcopal Peace Fellowship told me, "we've never gotten so much support at a Convention."

"Clearly the activists have done a good job promoting their agenda..."

Posted by janinsanfran at 7:30 AM

In Arabic we say to such good news: Mabrouk --let it be blessed!

Congratulations on a job well done. Now the Episcopal Church is truly practicing their religion. I hope all denominations will follow suit.