After May Day: the movement spurs anxieties 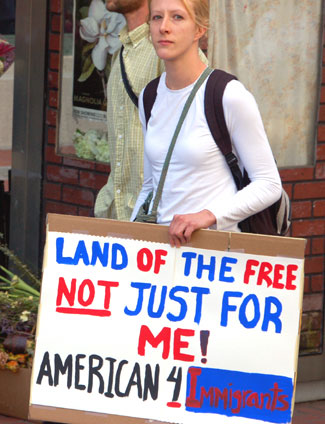 My previous post on the current immigrant insurgency, on the new civil rights movement, was written from a perspective formed by being in the streets and enjoying the wonderful energy of proud people rising up for dignity and justice. It is through such experiences that I have learned what I little know about the possibility of the beloved human community.

But of course, most people weren't there in the streets and might not want to be there. What might the immigrant uprising mean to them?

Periodic panics
First some history, to put present anxieties in context. The story of U.S. immigration "policy" is one of enthusiastic starts, punctuated by fits of fear. Those already here have repeatedly become afraid that newcomers would swamp their culture and threaten their livelihoods. In the west, in the late 19th century, the fear was labeled "the yellow peril"; Chinese immigrants were excluded by act of Congress in 1882. But white immigrants, from southern and eastern Europe just kept on coming -- by 1910, the foreign born were fully 14.8 percent of the population (they were only 10.4 percent in 2000.) In 1924, seeking to stem the tide, immigration law set quotas for the allowable number of immigrants by country, favoring whites and northern Europeans.

With the beginning of the Cold War, the McCarran Walter Act of 1952 added anti-communist provisions to the geographical exclusions; no godless revolutionaries were to be allowed. In 1965 the U.S. partially abolished the national origin quotas that had aimed to keep the country white and also began to facilitate family reunification (the opportunity for immigrants to bring close family members to join them.) This legal change particularly enabled Asian immigration. By 1986, the country had attracted 3 million undocumented migrants mostly from south of the border. A new law called for sanctions on employers who hired them but also offered amnesty to those already here.

The employer sanctions were not enforced; employers kept on hiring and migrants kept on coming. And so today, some U.S. citizens, some of those of us already here, including a minority of violent racists, demand a wall to close off the Mexican border and criminalization of undocumented persons already here. These provisions are embodied in Congressman Sensenbrenner's HR4437. This current panic sparked the current immigrant movement.

Race and racism haunt the new land
Meanwhile, not surprisingly, many African Americans wonder whether the result of this immigrant movement will be to further erase their contributions to this country. Some African Americans are directly in competition with the newcomers for low wage jobs and don't like that. But even more important to African American unease is fear that this latest wave of newcomers will simply adopt the unjust racial system of their new country. Andre Banks spelled this out in an article for the Applied Research Center:

There is little question that the current immigration debate, though coded and contrived otherwise, is entirely about race. Yet, the framing made popular by immigrants and their advocates is so hostile to Black people and our American experience that it seems impossible for us [African Americans] to stake a claim with this movement....

The narrative of the immigrant as the symbol of hard work that leads to opportunity can mean nothing but alienation for Black people precisely because we know this myth is false. Without our labor -- not immigrant labor, but slave labor -- in the fields and on the march there would be no market brimming with wealth and economic opportunity, nor a tradition of civil and political rights readily available for appropriation and exploitation....

New immigrants of color, unlike their European predecessors, should recognize that in passively accepting anti-Black racism in exchange for integration into U.S. culture and economy, they might issue a warrant for the future seizure of their own tenuous rights.

Mexicans, Salvadorans and Dominicans are not Irish, Italian and German. Racism, in its subtle sweep, touches every community of color. While it is true that Black people often end up at the bottom, other people of color, despite the comfort of an idealized immigrant narration, are nowhere near the top.

Many African Americans simply cannot identify with the immigrant narrative being promoted by the new movement. They didn't come here to better themselves and succeed through hard work. Their ancestors were dragged here in chains against their will and the fruit of their hard labor has been appropriated by generations of whites.

Banks reminds his readers that despite still being burdened by the U.S. racial hierarchy, majorities of African Americans have historically supported the justice struggles of other groups. The Rev. Jesse Jackson writes to encourage such support. He stresses historical kinship, urging solidarity among potential allies.

Immigrants of previous generations, including African Americans, should see the new undocumented workers as allies, not threats. They share with African Americans a history of repression, of being subjected to back-breaking, soul-deadening work -- or to no work at all.

They also share a common heritage. Less than 10 percent of enslaved Africans ended up in the United States. The vast majority were shipped to Latin America and the West Indies. People of color are brothers and sisters under and of the skin, whether we are called undocumented "Latino" immigrants or "African Americans."

As for the new civil rights movement, perhaps much of the discomfort created by this phrase is due to the fact that there is still much unfinished business in the "old" civil rights movement. The immigrant rights movement has to be sensitive to that reality.... Latino immigrants who today march for dignity know that they are part of the great tradition of the freedom marches, launched and led by African Americans. ...

The naysayers will always be there. So will those who want to divide us. What we have before us is an opportunity to reinvigorate our mutual work with the energy captured by the spirited expression that rang out across the nation on May 1 -- sí se puede!

The land was never empty

Ideally -- I know, what a scary word -- migration policies ought to focus on directing North America toward becoming an ecologically sound model of sustainable economics in which the borders will, decade by decade, lose their importance, and "globalization" will not mean exploitive homogenization nor be a synonym for corruption and greed.

Posted by janinsanfran at 10:14 PM

That is a phenomenal post putting immigration in a more historical perspective.

I keep trying frame immigration as a historical economic migration on par with the Irish to America or the gold Rush. We're talking a half million migrants a year for solely economic purposes.

A wall doesn't resolve that. Look at the chances other economic migrants take. Americans streamed across all that unknown land to get to California in the 1850s.