Night Draws Near:
Iraq's People in the Shadow of America's War 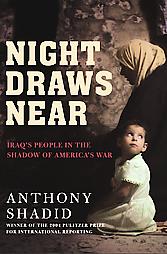 Anthony Shadid's reporting from Iraq for the Washington Post first grabbed my attention in early June, 2003. This was at the beginning of the U.S. occupation under proconsul Paul Bremer. Shadid, an Arabic speaking, Oklahoma-born, Lebanese-American, had lived through the invasion and the subsequent looting in Bagdhad, sharing fears and hardships with many Iraqis.

Upon the arrival of his Post colleagues, Shadid and Thomas Ricks were able to conduct a telling experiment. Ricks accompanied a group of U.S. soldiers on patrol; Shadid followed the squad, gathering the impressions of Iraqis about their interactions. Where a G.I. saw the Iraqis as "ninety five percent friendly," Shadid heard the occupation was "despicable....They're walking over my heart." The U.S. soldiers were particularly proud of their assistance to the Rami Institute for Autistic and Slow Learners, enjoying leaving their guns in the school yard while they played with the children. They had no idea, as Shadid reported, that the young Iraqi men clustered outside suspected that the soldiers might be having sex with the women teachers: "Only God knows ... I haven't seen it with my own eyes. But I've heard about things."

Night Draws Near collects Shadid's reporting on the gulf between invaders and Iraqis that has played out in repeated episodes of bloody devastation and human desolation. He arrived in Iraq while Saddam Hussein was still in power and wraps up the book with his observation of the January, 2005 election of purple thumbs. In between he made friends and, with the help of his Iraqi "fixer," conducted searingly honest interviews with many who came to hate and fear the occupation. Because he so obviously likes and cares about many Iraqis, he tries to find a hopeful note to end on, but the overall impression he conveys is of bewilderment striving to hold off despair.

As a U.S. activist who has followed the course of the invasion and occupation quite closely, I was struck by how Shadid, reporting from Iraq, reports a quite different understanding of the phases of this sorry story. At the beginning, the picture from my U.S. point of view was in sync with that of the Iraqis -- shock and awe bombing, then invasion, the toppling of the Saddam statue (which I always thought of as a vignette made for TV) followed by terrible looting and insecurity.

But soon our pictures diverge. In Iraq, the summer of 2003 seems to have been about the Shiites exuberantly claiming power commensurate with their numbers and the rise of the young cleric Muqtada Sadr. From the U.S., the picture was dominated by the failure to turn up any WMDs and by the surprising durability of a Sunni-led insurgency that blew up the U.N. humanitarian mission. We could only dimly understand that for Iraqis the U.S. presence was rapidly hardening into a humiliating occupation, on a par with that suffered by the Palestinians.

As Shadid reports it, the next phase as seen by Iraqis began with coordinated bombings that killed scores in Bagdhad on the first day of Ramadan, October 27, 2003.

[T]he conversations would never be the same again, and the perception of the American military in Iraq was taking yet another turn; the all powerful army imbued with technological prowess has become, first a callous overseer in a looted capital, then an insensitive occupier in a Muslim land, and now, in the wake of the Ramadan bombings, it was a provocative presence whose visibility only deepened the strife....Dread was everywhere.

In the U.S., I don't particularly remember this turning point, though I know many of us thought the Administration was lying to us daily when claiming "progress."

In December 2003, when Saddam Hussein was captured, the U.S. Administration worked to spin the event, especially on its deluded homefront, as evidence of further "progress." According to Shadid,

Saddam soon became a sideshow in Iraq. The stakes were higher: Who has the right to rule and from where does that right arise?

A radicalized Islam was filling the power vacuum left by Saddam's overthrow. In Sunni areas, racial clerics celebrated martyrdom in the fight against the U.S. invaders. Among Shiites, traditionalists followed Ayatollah Sistani who urged deliberate steps toward restoring Iraqi governance under Shiite leadership; younger and poorer Shiites were drawn to young Sadr who called on them to expel the occupiers. 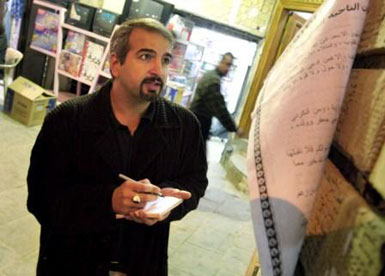 Shadid reports from Najaf near the Imam Ali shrine, one of Shi'a Islam's most venerated sites.

Shadid dates the next phase in Iraq as beginning with suicide bombings on March 2, 2004 in the Shiite cities of Najaf and Karbala. More than most anywhere in Iraq, the shrine cities had prospered from the overthrow of Hussein, filling with pilgrims finally able to worship at the shrines. When they too were bathed in blood as Baghdad and the Sunni triangle had long been, in the eyes of Iraqis the occupation had irretrievably proved that it would not or could not rule. It was over, even if Paul Bremer in the Green Zone and George W. in Washington hadn't noticed yet. Uprisings by Sadr's Mahdi Army in the south and the capital and by militant Sunnis in Fallujah followed.

For U.S. observers of the occupation, the spring 2004 uprisings were not exactly a shock, but their scope and the short term successes certainly were impressive. From our great distance, it took a long time for people to believe that Iraq was not under U.S. control, but that spring this impossible truth began to seem real. John Kerry had already emerged as the Democratic nominee for President; his popular base was rapidly realizing that the U.S. adventure in Iraq was a failure, just as Kerry let himself to be trapped into trying to explain how he'd do occupation better than Bush. The Iraqis were residents of a grimmer reality, spiraling into an inter-communal power struggle; the occupiers thought they were steering the ship but actually were simply trying to navigate impossible rapids while lumbering about with lethal weaponry.

Shadid's story ends in 2004 (with a short epilogue about the 2005 election.) As just about anyone reading this knows, Iraq has simply become bloodier and more chaotic since. For a current accounts of life in Iraq's capital, try Treasure of Baghdad; if you are like me, you'll weep.

***
There was one more insight from Night Draws Near that I wanted to mention. Shadid writes:

Time and time again I am struck by how seldom I hear the work hurriya, "freedom," in conversations about politics in the Arab world....Much more common among Arabs is the word adil, "justice," a concept that frames attitudes from Israel to Iraq. For those who feel they are always on the losing end, the idea of justice may assume supreme importance.

Posted by janinsanfran at 6:14 PM