After May Day:
A new civil rights movement? 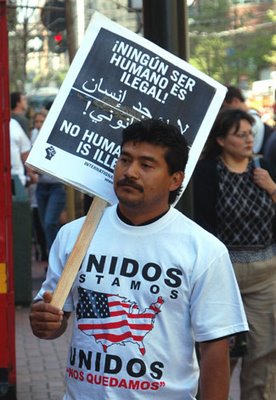 After nearly a week, I may be ready share some semi-coherent thoughts about the exhilarating immigrant marches last Monday. I do believe we are seeing something that does not fit neatly into our existing political categories. Because it is new, and because it is not mine, I am a little hesitant to attempt analysis -- but here goes...

A surprise development
The size, broad scope, and determination shown in the marches clearly took this country by surprise. Where'd all these people come from? Of course, they've been with us for a long time (the average undocumented worker has been the country five years.) But we simply don't look at them. I'm reminded of visiting family in Palm Desert, California. They live in a gated-community, an oasis of manicured green, surrounded by cactus, rock, and brown desert. All day, silent shapes tend and water the luxuriant plantings, unacknowledged by the golf cart driving residents. Bet those workers took a day off on Monday to assert themselves as human beings. We, the comfortable white middle class and certainly the opinion-forming media, are more like my oblivious retired relatives than we usually care to know.

And there are vast numbers of these people. Estimates say 12 million U.S. residents are now undocumented. Fully thirty-three percent of U.S. population growth in 2004 came from immigration according to the National Geographic quiz some of us have been playing with. When such a large group suddenly makes itself visible, it is hard not to take notice. 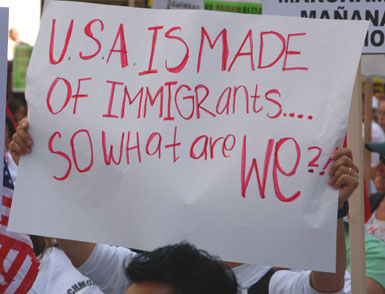 Real life, not protest theater
The marches felt different from most of our experience in other ways. The folks in them have already demonstrated their grit by simply getting here. It is not easy to leave home and come here to work at menial jobs. We are sucking the adventurous and the enterprising out of the Latin countries to the south, as well as less obviously from much of the rest of the world.

Furthermore undocumented immigrants are truly poor people; when they risk even the little that they have in order to assert their dignity and humanity, their protest carries a moral weight quite different from the set piece acts of "civil disobedience" that have characterized much middle class agitation for the last 30 years. For an undocumented worker, the possible consequences of political protest are literally incalculable; fortunately there have not been many reports of retaliation against participants in the May Day marches. 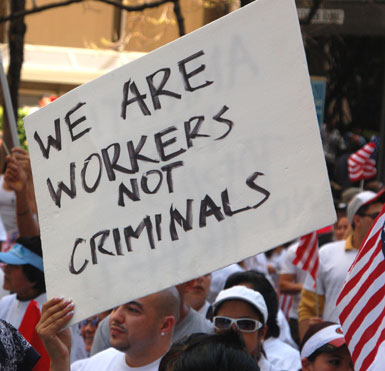 Undocumented immigrants are workers
Well, duh... But think about it for a minute: how often in most of our lifetimes have people who thought of themselves as workers led a protest movement? We've seen movements organized around race, around gender, around aspirations for peace -- but seldom by and for workers. Sure, there was lots of ethnic, Latino, Mexicano, pride in the marches, but as well and often more so, these folks see themselves as proud workers. In fact, to a considerable extent, they are the U.S. "working class" as that term once was commonly if imprecisely understood: they are the people whose work gets them dirty, whose work subjects them to daily physical effort.

Their self-understanding as workers was clear in how the day's events were planned. They called the protests for May Day, celebrated as International Workers Day in most of the world. They urged from the beginning they would walk out for the day and boycott as well; professional immigrant advocates wanted to tone down the protests. However people who see themselves as workers understand that what the society values them for is their labor and so it is by withdrawing their labor that they assert their dignity.

The hand painted signs at the rallies over and over again expressed outrage that Sensenbrenner, Tancredo, the Republican House of Representatives, or anyone would call them "criminals." They know, proudly, that their labor creates much of the country's wealth. "Si se puede; yes, we can!"

Undocumented immigrants appeal to ideals
For most of us, this is a time of political cynicism. The politicians are rotten and our system is failing. Immigrants know political cynicism; many of them come from countries that can make even less claim to practicing justice and equity than George W. Bush's United States. But nonetheless, their movement aims to speak to this country's ideals. Many signs and speeches demand that the United States demonstrate its best characteristics, not its worst. They insist over and over: "You are a nation of immigrants; don't you remember your ancestors came here poor and hungry?" "How can you treat us as less than human?" "Don't you understand we are really just people, like you?" They wave the U.S. flag hopefully. 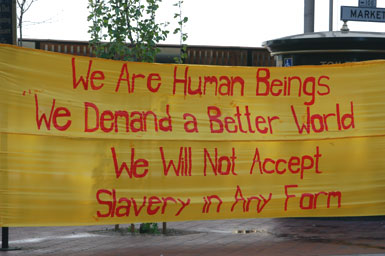 A bumpy road ahead
If the emergence of the immigrants is indeed the new civil rights movement, like the last one it is not going to make gains without struggle. It is easy to see some obstacles ahead. I'll list a few:
Posted by janinsanfran at 8:05 AM