Decoration Day:
War. What is it good for? 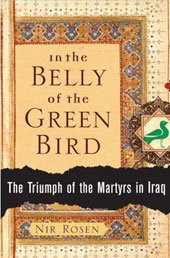 When I was a kid, my mother called Memorial Day by its original name: "Decoration Day." We would go to the cemetery and make sure the veterans who put out the urns of flowers had marked the graves of those of our ancestors who had actually served in the country's wars. There were a lot of them, going back to the War of 1812 -- and the flowers were usually on the wrong graves. We'd move the flowers.

I don't remember the day being any kind of celebration of these men's wars. Wars were bad things that "just happened" to good people. The soldiering men, including her father who invaded Cuba in the Spanish-American adventure, lived or died and went back to their lives. I gathered that was the point of wars: to get back to real life, if you lived.

Preparatory to a trip to Lebanon, Jordan and Syria, I've been doing my homework about the Iraq war. What I've learned is all too simple. Iraqis are never going to be able to go back to their lives.

Anthony Shadid's Night Draws Near tells the story one way.

Nir Rosen's In the Belly of the Green Bird: The Triumph of the Martyrs in Iraq tells the same story in an even harsher vein. (Martyrs enter heaven via a green bird's stomach in Muslim writings.) Over a cumulative two years in Iraq since 2003, Rosen a U.S.-born journalist who lives in Turkey and speaks Iraqi-accented Arabic, watched the Shiites celebrate their historic festivals of martyrdom that had been repressed under Saddam Hussein and saw the growing strength of the street gang-like Shiite Mahdi Army loyal to Moqtada al-Sadr. He heard resistance to the U.S. occupation preached in Sunni mosques and was the first journalist to get into Fallujah after that rebellious city held off the U.S. Army in April 2004. He was embedded with U.S. forces on the raid that captured Iraqi Major General Abed Hamed Mowhoush -- Mowhoush later died in U.S. custody after being stuffed head first into a sleeping bag and beaten, a death an army medical examiner ruled "homicide by asphyxia." He observed the January 2005 election in Kirkuk, a valuable oil-rich city where armed Kurdish militias were bent on driving out Iraqi Arabs.

Today Rosen, reported his conclusions in shorter form in the Washington Post:

Under the reign of Saddam Hussein, dissidents called Iraq "the republic of fear" and hoped it would end when Hussein was toppled. But the war, it turns out, has spread the fear democratically. Now the terror is not merely from the regime, or from U.S. troops, but from everybody, everywhere.

At first, the dominant presence of the U.S. military -- with its towering vehicles rumbling through Baghdad's streets and its soldiers like giants with their vests and helmets and weapons -- seemed overwhelming. The Occupation could be felt at all times. Now in Baghdad, you can go days without seeing American soldiers....

Today, the Americans are just one more militia lost in the anarchy....

The world wonders if Iraq is on the brink of civil war, while Iraqis fear calling it one, knowing the fate such a description would portend. In truth, the civil war started long before [the February mosque bombing in] Samarra and long before the first uprisings. It started when U.S. troops arrived in Baghdad. It began when Sunnis discovered what they had lost, and Shiites learned what they had gained. And the worst is yet to come.

Go read all of it and quake in horror.

War. What is it good for? Absolutely nothing. Sing it, Bruce Springsteen; I suspect most of my ancestors who served would agree.
Posted by janinsanfran at 10:52 PM

Wanna know something funny? The green bird comment in the book..as a Muslim and someone who is moderately orthodox. I honestly never heard of it till you told me!

Some would argue the reality is events like wars shake things up and are neccessary for society to develop..it drives technological development..but saying that the two biggest developments of the 20th century ..one Nukes and the other the microchip..the first was developed by war and the second because of the space race..when you think of it like that thee is an alternative to war and thats touching the stars..

Zak -- that is very beautiful indeed, what you say.

Interesting about the green bird -- wonder if it is a regional folk lore, particularly a story from some places, probably places where there are beautiful green birds (any we have here are very small.)

arrived here via TGB blog and enjoy your take on the struggle for a smaller american footprint in the world. hope your lebanon trip goes well.

jan: there I asked around there is a religious tradition about the green bird..very interesting you learn something new everyday!