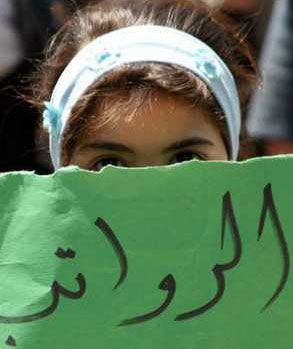 A Palestinian girl holds a sign that reads in Arabic "salaries" during a demonstration by school teachers calling for payment of their salaries in the West Bank city of Nablus May 10, 2006. REUTERS/ABED OMAR QUSINI.

This story is a jaw dropper. Young Palestinian men are trying to get themselves arrested at Israeli checkpoints in order to be sent to prison where they can more easily study for exams than in the starving occupied West Bank, according to Reuters.

Israeli army officials say at least 80 young men have either turned up at checkpoints and asked to be arrested or else carried knives and other weapons to ensure they are detained. ...

Hijazi Abdul-Rahman, 18, who lives in a village near Jenin, in the northern West Bank, went to a nearby checkpoint with his friend Malik a month ago in an attempt to be arrested. Abdul-Rahman carried a small knife and Malik, who would not give his family name, openly carried a badly wired bomb.

They were detained by Israeli security forces and sent to a holding cell but released 25 days later after it emerged under interrogation that they were not a serious security threat. For Abdul-Rahman it was a grave disappointment.

"I lost my chance," he said, speaking at his home in a village north of Jenin. "I wanted to do my high school exams in prison because it is easier there than at school here." ...

"It's better to spend even your whole life in prison than to be stuck here," he said. "Here we can't even have a sandwich."

This story smells like somebody's disinformation campaign, but I have no way to know if it is true. If it is true, it speaks to a horrendous level of despair in occupied Palestine. Not surprising, given the US and European cut off of aid to Palestine in reaction to the election of the Hamas government. As of yesterday, apparently some assistance will resume, now that Israel's allies have shown who is boss.
Posted by janinsanfran at 12:33 PM

The plight of the Palestinians is the reason we were hit on 9/11. See "The 9/11 Commission Report" p. 147 wherein it states that the mastermind of 9/11, Khalid Sheikh Mohammed, said he attacked us because of our biased support of Israel. Our so-called War on Terror will never end until we bring justice to Palestine. See "Why They Hate Us" Jan 06 www.dundeesblog.blogspot.com