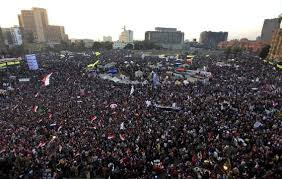 There is something about the military coup in Egypt and the ongoing travails of that country that brings out whatever racist and Islamophobic filth lurks in the recesses of what passes for minds among United States right-wingers.

Egyptians would be lucky if their new ruling generals turn out to be in the mold of Chile’s Augusto Pinochet, who took power amid chaos but hired free-market reformers and midwifed a transition to democracy.

My emphasis. Apparently the Journal is enthusiastic about torturing military thugs. The Chilean "transition" only came after Pinochet had held dictatorial power for 17 years and finally, to his surprise, found himself on the wrong end of a sham national vote he expected to win. Even the military was tired of him and democracy was very slowly rebuilt. (The Journal article is behind a paywall, so I've linked to a commentator far more knowledgeable than I who quotes the statement.)

Meanwhile, in the New York Times the conservative columnist David Brooks seized on the occasion of the Egyptian coup to express his essential contempt for the capacity of brown people, Arab people, who adhere to a "foreign" religion.

… Islamists might be determined enough to run effective opposition movements and committed enough to provide street-level social services. But they lack the mental equipment to govern.

… incompetence is built into the intellectual DNA of radical Islam.

.. It’s not that Egypt doesn’t have a recipe for a democratic transition. It seems to lack even the basic mental ingredients.

Mr. Brooks sure doesn't convince me with this tripe that he has particular brains or powers of observation -- all he seems to have is bigotry about an ancient nation whose citizens are struggling messily toward their own system.

I don't pretend to much idea what is going on in Egypt. But I do know that citizens of this country forget our own history if we demand that other people who are just trying to get a free country off the ground after a long siege of foreign rule and oppression will pull this off without some bumpy bits. Consider this trajectory:
Yes -- that's a plausible rendering of the history of the adoption of the United States Constitution. (More on this process here.) The more established countries of the world almost certainly thought they were observing a hopeless muddle that was certain to collapse of its own incompetence soon enough.

Getting a new country off the ground is hard, dicey work. Racist foreign pundits reveal their ugly ignorance when they try to make sense of events through the lens of their fetid prejudices.
Posted by janinsanfran at 5:00 AM

I am appalled! Thank you for your astute and thoughtful observations. Enjoy your blog very much,including your book reviews.
Lori

Thanks for coming to my blog. I spent many days gathering my old postcards, photos and digitizing slides but I finally finished the trilogy and now can visit blogs. I looked at your older posts – there is a lot in there to think about. I saw your post on “Latino” with some explanations. I have friends from Spain (Europe) are they considered “brown”? and Latino too or European – I am kind of puzzled, or is this name just for North Americans (Mexico) and Central/South Americans? It is strange how people are compartmentalized here. I helped my Algerian trainees to obtain driver licenses and in the race blog I told them to write C for Caucasian, but the officer there said that since Algeria is in Africa they were supposed to check B for black (even though they were not.) Also while in Africa I read an article in and African magazine about Tiger Wood, and they called him “Asian-American” because his mother is from Thailand and in Africa, they don’t consider Tiger African – but here they call him African American – it’s hard for me to understand all this.
I do not like to watch or read the American media on Egypt. You know my aunt and uncle were Egyptians and my first cousin is too and I have been there several times – it’s hard for Americans to understand that culture – actually, I think that it’s hard for the average American to understand other cultures… or other religions than Christianity.

"Race" -- I believe -- is a set of categories people in the United States are particularly inclined to make up and impose on unfamiliar people in order to reassure ourselves about where we stand.

Other peoples think "race" is very important also; after all I worked in South Africa before apartheid was ended, so I know that. I particularly remember how offended a Jamaican-American friend was in South Africa because it was important to him that in the US he was Black -- but there South Africans were sure he was "colored."

Vagabonde -- I love your pictures of San Francisco back in the day. I would urge people reading this to go take a look!