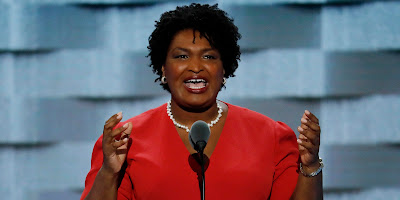 Rebecca Traister passes along this woman's inspirational project. It won't happen this time, but Stacey Abrams, state house Minority Leader, has a clear, practical plan to pull Georgia in a more progressive direction. She's not just shooting shit; over time, she intends to win. Some excerpts from a much longer interview:

So how’s it going?
I think it is -- going. We’re moving in the right direction. It will always be a heavy lift because until you’ve proved it’s possible then it’s always potentially impossible. And Georgia has not had the level of investment in our elections that you would need to see since the 1990s, since the last President Clinton.

... the demographic migration in Georgia is massive and it’s unique; between 2000 and 2010, 1.5 million new people moved into Georgia, 1.2 million of whom were people of color. ... By 2024–2025, it’s estimated that Georgia will be majority minority and that majority will be 33 percent African-American, 11 percent Latino, and 9 percent Asian-American.

And so your aim is to turn out all these new residents to vote.
You want everyone. You want white swing voters. But your untapped population, the population we haven’t spent a great deal of time or effort on, is people of color. And the goal is spending time early, convincing them that their votes matter. If you want progressive policies, these are the folks you go to.

... In 2014 we began to focus on it, because I’d heard about this 800,000 number for years. And that’s not to say that there haven’t been civil-rights organizations on the ground trying to tackle it, but it’s expensive. You’re not talking about a population that walks up to your door and asks to register; you’re talking about a population that no one ever asks to register and therefore never thinks they should register. Which means instead of standing at a festival, you have to go and knock on their doors. And not everyone lives in Atlanta. Which means going to rural communities, going to depressed communities, going to communities where there is absolutely no trust in politics or in politicians. And that is an expensive endeavor.

You very rarely hear about enthusiasm for Clinton in the national narrative.
I think there’s a false comparative that exists in this election, where Barack Obama is used as the barometer for enthusiasm. Barack Obama was a phenomenon. He, over the course of fewer than four years, went from an unknown state senator who defied political history and racial history and stepped onto the stage with a mix of skills we had not seen before. And he did so in such a singular way that to ever compare any other presidential candidacy to his is to by definition devalue what he accomplished, but also to create a false expectation for everyone else.

Let's hope Abrams can keep on keeping on.

Tomorrow this election will be over, praise be! For today I'll be putting up collected oddments that have caught my eye which will soon be just history.
Posted by janinsanfran at 5:00 AM