History for a #BlackLivesMatter moment 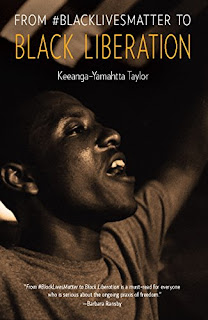 From #BlackLivesMatter to Black Liberation by Keeanga-Yamahtta Taylor is an eloquently constructed and argued narrative of the era of US history from the waning of the Black civil rights and Black Power movements of the 1960s through the recent police murders of Michael Brown, Eric Garner, and Freddie Gray. Every eruption in the long arc of struggle needs its own historical tale of how current conditions came to be -- and takes shape from the particularities of its time. As Taylor writes:

Ideas are fluid, but it usually takes political action to set them in motion ...

Taylor grounds her history in rejecting, as all of us must when confronted with facts, the authority of "a simple morality tale about those who try hard and those who don't" constraining the conditions of US Black people.

From the mutual foundation of slavery and freedom at the country's inception to the genocide of the Native population that made the "peculiar institution" possible to the racist promulgation of "manifest destiny" to the Chinese Exclusion Act to the codified subordinate status of Black people for a hundred years after slavery ended, they are all grim reminders of the millions of bodies upon which the audacious smugness of American hubris is built. Race and racism have not been exceptions; instead they are the glue that holds the United States together.

I will not try to encapsulate Taylor's story arc here. Some chapter titles are suggestive: "From Civil Rights to Colorblind," "Black Faces in High Places," and "Barack Obama: the End of an Illusion." In "The Double Standard of Justice" she takes up the history of policing of Black bodies.

the struggle for Black liberation requires going beyond the standard narrative that Black people have come a long way but have a long way to go -- which, of course, says nothing about where we are trying to get to. ... Most importantly, [this] requires a strategy, some sense of how we get from the current situation to the future. Perhaps at its most basic level, Black liberation implies a world where Black people can live in peace, without the constant threat of the social, economic, and political woes of a society that places almost no value on Black lives. That would mean living in a world where Black lives matter. While it is true that when Black people get free, everyone gets free, Black people in America cannot "get free" alone. ...

Taylor is a socialist internationalist, condemning global capitalism as that she insists on the particularities of the US Black experience.

Some months after the release of this book, Taylor affirmed the significance of the Movement for Black Lives policy program in an interview in Salon:

The movement platform gets [to] all of this and then discusses what alternatives could look like. It’s an incredibly important document. This document is not concerned with getting cozy with those in power. ...

***
I found this a brave and important book. If Taylor has described the truth of this moment in the US Black story accurately -- and I think she has (assuming any of us survive the next chapter as we probably will) -- her narrative will come to seem largely the obvious, unsurprising, reality of this time. Just as Michelle Alexander's New Jim Crow made the horror of Black criminalization and mass incarceration a known commonplace, this book will have situated Black Lives Matter -- all its contesting branches -- in our understanding. That should not erase the extraordinary accomplishment that is laying this out, before we all see it as "just how it is."
Posted by janinsanfran at 5:00 AM

Appreciate this, because I won't have time to read the book but want to know something about it. What I am thinking about now, mostly, is the scapegoating of African Americans, the attempt to designate them as a permanent underclass to which all other groups are encouraged to feel superior.


Hattie: I used to say, often, that every immigrant group was offered the chance to become "white" so long as they assimilated historic "white supremacy." This held more strongly in eras of low immigration. All those Irish and Italian and eastern Europeans became "white" when the US was not admitting much of anyone -- 1924-65. More open immigration was the consequence of the civil rights revolution, just as birth right citizenship was a consequence of the Civil War amendments. Current white nationalists would like to do away with both.

That is not Taylor's subject. She's articulating how an incomplete revolution left most US Black people outside, subjugated, and vulnerable.