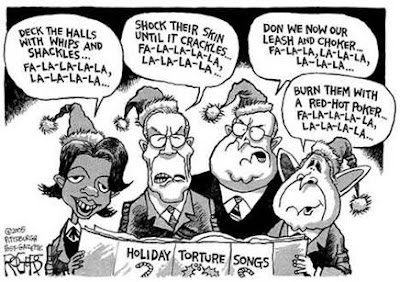 Eric Lichtblau, who has been a warrior at the NYT exposing government overreach and malfeasance, has plunged down the rabbit hole of false equivalence.

Chants of “lock her up” became a frequent rallying cry at Trump campaign events, and Mr. Trump told Mrs. Clinton at the second presidential debate that if elected, he would instruct his attorney general “to get a special prosecutor to look into your situation because there has never been so many lies, so much deception.”

If he were president, he told her, “you’d be in jail.” That threat unnerved both Republican and Democratic legal analysts.

The decision he faces echoes one confronted by Mr. Obama and his first attorney general, Eric H. Holder Jr., over whether to investigate Bush administration officials for extreme interrogation tactics against terrorism suspects that the Obama administration later deemed to be torture.

While Mr. Holder said the country was owed “a reckoning” for torture carried out after the Sept. 11 attacks, the Obama administration ultimately did not conduct a broad criminal investigation. Mr. Obama declared that “we need to look forward, as opposed to looking backwards.”

Let's see -- technological incompetence and being foolishly private and unwilling to grovel is just like making the United States into an acknowledged violator of international law and torture state?

Lichtblau (and his colleague James Risen) have good reason to indict the U.S. government for using brute legal threats to try to stop them and their sources from revealing information that it wants kept secret.

But this item doesn't pass any elementary sniff test.

Posted by janinsanfran at 7:02 PM