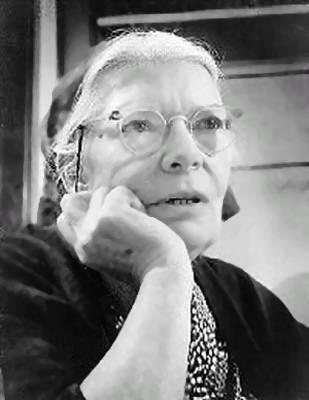 During Pandemic Flu Awareness Week, I have nothing to add to the excellent work of the Flu Wiki. If you aren't already scared silly about bird flu, read the articles there. The question raised by endemic bird flu in Asia is not whether the world will someday experience a lethal pandemic, but when? Will our structures of health care delivery be adequate to care for the sick and limit effects? Will the worst of the toll, both from sickness and social disruption, fall as usual on those already in need?

I have nothing useful to add on those questions. Instead, I thought about who I had known who lived through the pandemic in 1918 and what they conveyed to me. My parents were in that category, but they were children and all they remembered was not being allowed to go out -- practical quarantine by smart parents.

However, Dorothy Day, the founder of the Catholic Worker Movement which is sometimes described as anticipating Vatican II and liberation theology, did sometimes reminisce about the epidemic. What I remember hearing from her was that overwhelmed medical facilities could do little for those who fell ill -- and how hard those lucky enough to stay well worked caring for the sick.

In 1918, Dorothy Day was twenty-one and had already jumped in adulthood with gusto.

She [had] attended but … not graduated from the University of Illinois. "I really led a very shiftless life, doing for the first time exactly what I wanted to do."

In 1916, her family moved to New York and she went with them, to pursue a career as a revolutionary journalist. She became a regular correspondent for left-wing publications such as the Call and the New Masses. She got involved in the hot-button issues of the day: women's rights, free love, and birth control. In 1917 she joined pickets in front of the White House, who were protesting the brutal treatment of women suffragists in jail; they wound up serving thirty days in the workhouse at Occoquan. Source: Beth Randall's excellent short biography.

Still she felt she was not doing enough to make a better world? What could she do next as the US plunged further into a European war she viewed as an imperialist crime? Day decided she ought to work to alleviate the suffering of the poor. So she signed on to be trained as a nurse at Kings County hospital in Brooklyn just in time to work through the influenza epidemic of 1918. Here's part of her account of this time as she wrote it in From Union Square to Rome, an autobiographical account of her conversion to Catholicism.

Since so many nurses had enlisted for the Red Cross, often there was no more than one nurse to fifty patients. Even though we were probationers and not given very much responsibility, and there were ward maids and orderlies to take care of many of the disagreeable details, we had a great deal of physical labor. It was a city hospital and patients had to be very sick before they were admitted. We had to change each bed every day, bathe all our patients, rub them down with alcohol, dress bed sores, give out the medicines, attend demonstrations, and generally assist in the irrigations and injections, tappings for spinal and lung fluid, and all the other treatments for patients in the medical and receiving wards. …

That was the year of the influenza epidemic, and we worked so hard that we fell unconscious into our beds at night and had to drag ourselves out of sleep in the morning. I had to take cold baths when I got up because if I got into warm water I fell asleep. Most of the nurses were keen and zealous over the work. We were all so busy we did not have time to suffer over the human misery we saw, although it was heart-breaking to see young people dying all around us of the flu. Often we had to prepare for the morgue as many as eight corpses a day.

Every morning we were expected to have our wards in order by ten o'clock, and it used to give me pleasure to see everyone cleaned and washed and neatly tucked under white counterpanes in the long rows. They were good patients because they were poor and did not expect too much. They were uncomplaining, and they accepted their suffering with stoicism. They did get good food and clean bedding. In the middle of the morning we gave everyone eggnogs, and in the male wards most of the men who were in the habit of drinking got a good stiff drink of whiskey in the eggnog. …

One got into the habit, in the hospital, of consistent, sustained effort and of disregarding fatigue, both physical and mental.

In the end, Dorothy Day learned during that year that her calling was not nursing, but writing and advocacy on behalf of the poor. However, the year of disciplined labor during the flu epidemic set the pattern for the rest of her days. She took that lesson and followed it all her life; after her conversion to Catholicism, she imposed on herself a regular rotation of daily mass attendance, prayer, and reading and writing; orderly practice gave her a fundament of calm amid the pressures of leading an often chaotic movement providing refuge for the needy and the downright nutty.
Posted by janinsanfran at 2:44 PM

this is a wonderful summary. Thanks for finding it!