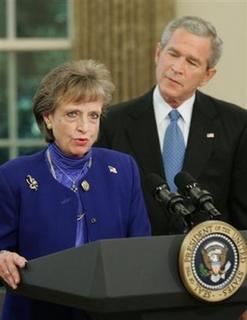 I admit it. Melanie at Bump in the Beltway does most of my Washington Post reading for me. I haven't the energy to sort through the sycophantism to find the interesting bits -- fortunately she does.

Today she passed along The Right's Dissed Intellectuals by Harold Meyerson. It is a great piece; Meyerson has nailed why conservatives are wailing about Bush naming the pedestrian Harriet Miers to the Supremes:

…her nomination was … an affront to the amour-propre of conservative intellectuals everywhere.

Yes -- that is indeed what apologists for greed, sexism and racism care about: their self-image as esteemed deep thinkers. They whore their intellects for the powerful and want to be admired.

The Miers announcement says to them that the President (who they think they created) disdains their brains -- they are just interchangeable, useful tools of the truly powerful. It is a nasty come-down.
Posted by janinsanfran at 11:30 AM