Gov. Arnold runs away from his ads 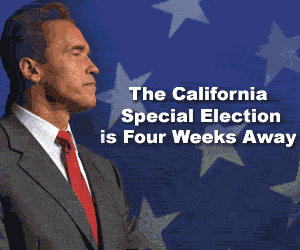 I've been out of California for 10 days, but the Governator has been right with me. Nearly every time I opened an LA Times article on the web, I saw the ad pictured above. Today the same paper tells me the steady diet of "all Arnold, all the time" is over.

Gov. Arnold Schwarzenegger asked TV stations Friday to remove ads that feature him making a personal appeal to California voters — an acknowledgment, analysts said, that one of the world's most recognized figures has become a weak salesman for his own agenda.

An avid pitchman his entire adult life — selling everything from gym bags to action movies — Schwarzenegger nevertheless now will rely on "ordinary" supporters to promote his four Nov. 8 ballot initiatives in ads, his campaign said.

I can't say I'll miss him. Nor, apparently will other Californians.

The Preznit had to miss him yesterday though -- if there is one pol less popular in California than Arnold, it is Bush. So our anxious governor snubbed Bush's trip to the Reagan library.

It is clear which way the wind is blowing -- so long as enough Californians vote on November 8.
Posted by janinsanfran at 5:20 AM