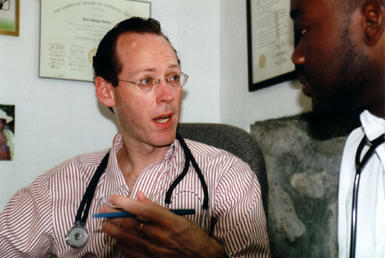 Dr. Paul Farmer of Partners in Health, at his clinic in Cange, Haiti, in a scene from "A Closer Walk," an exploration of the social meaning of the AIDS epidemic. Photo by Worldwide Documentaries, Inc.

Dr. Paul Farmer believes that it is duty of doctors to serve sick people -- all of them, everywhere, though he has assumed a particular burden of affection and care for the poor of impoverished central Haiti. Tracy Kidder's Mountains beyond Mountains chronicles Farmer's example of devotion to principle is so admirable, so extraordinarily self-sacrificing and efficacious, that he is more than a little hard to take for mere mortals. The extraordinary accomplishment of Kidder's book is to make this difficultly admirable individual more attractive than frightening.

Farmer makes no bones that there is a cost to doing right by the poor:

White liberals "think all the world's problems can be fixed without any cost to themselves. We don't believe that. There is a lot to be said for sacrifice, remorse, even pity. It is what separates us from roaches."

At the core of Farmer's belief system is "the preferential option for the poor," a phrase and an idea derived from Catholic liberation theology as articulated by Latin American bishops at Medellin, Columbia in 1968. Liberation theology asserts that the world's wealthy, a category that includes most everyone who has enough to eat, a roof over our heads, the ability to read and a stable political environment owe the poor some of our food, shelter, education and respect. "Sin" is not some individual failing, but rather lives in systems in which a few profit without protest from the enforced misery of others. For those who enjoy wealth, sharing is a hard demand and few of us can live up to it. Farmer comes very close, sacrificing comfort, time, and family life for his patients and his vision of world health.

The folks who work with him know though, that not everyone can be Farmer.

Jim Yong Kim, his collaborator, insists "Paul is a model of what should be done. He is not a model how it has to be done. … Let's make sure people are inspired by him. …But … if the poor have to wait for a lot of people like Paul to come along before they get good health care, they are totally fucked."

Farmer himself explains: "I didn't say you should do what I do. I just said these things should be done!"

Perhaps this indifference to others' reactions to his person is the key to Farmer's extraordinary ability to get resources and care for people who have nothing. Farmer is apparently wonderfully focused on results, not on what people think of him. Yet Kidder is also able to convey the warmth and generosity with which Farmer meets all those who fall into his category of "patients" -- a category into which he welcomes just about anyone, including the privileged, who might have need of medical care. In the end, Kidder convinces me that Farmer burns not only with anger at the systemic injustice which condemns Haitians and others to poverty and disease, but also with a love for the well-being of all people that transforms that anger into service. Not a bad model to emulate, even if most of us can't quite pull it off.
Posted by janinsanfran at 7:45 PM