Take a trip to Pete's Pond

Good things should be shared. If you find yourself wishing you were somewhere else, you might want to try a quick broadband trip to Botswana to watch live wild animals at their watering hole.

National Geographic magazine has installed a Wildcam in the remote Mashatu Game Reserve. As I write this (at nearly 11 PM Central Daylight time) sunrise is coming to Botswana. Bushes that appeared as gray shapes half an hour ago are taking on color; dawn is breaking. Soon the animals will come to drink. 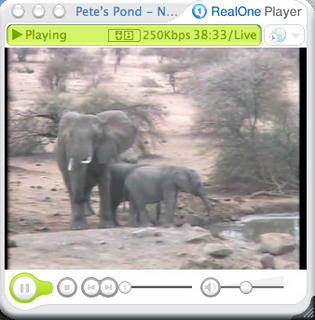 Arriving in this area in 1985 to conduct a leopard research project as a graduate student from South Africa’s University of Pretoria, Pete Le Roux, quickly realized that poachers were decimating the animal population. So he built a pond, a watering hole well away from the overpopulated (with humans) Limpopo River. Now the area is being incorporated as a much larger wildlife corridor, the Limpopo/Shashe Transfrontier Conservation Area that takes in parts of South Africa, Botswana, and Zimbabwe, and is slightly larger than Rhode Island. Areas like this are the best chance big creatures have for survival in Africa, pressured as they are by desperately poor human populations.

Putting up the Wildcam was a considerable technical feat. It uses a dedicated satellite link to send its high quality video. And getting the computer connected was not the only challenge:

A curious creature, however, could interrupt all the electronic wizardry. The perimeter of the array is fortified with high-strength wire and electrified fencing, while the computer and camera apparatus are secured in tight cabinetry. It’s harmless to the wildlife and discourages their attempts to get in. But even with protection, anything can happen. “You have to animal- and insect-proof everything,” says Cameron Murie, [resident techie]. “Otherwise, it’s a real problem. In this place if you get a bug in the system, it really is a bug.”

Now the elephants have taken to eating the bushes. I guess the spring shoots are tasty. 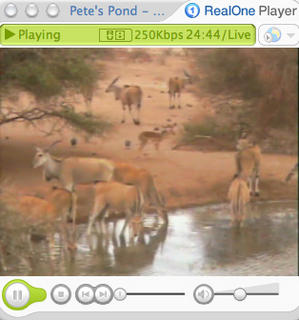 It is getting lighter now. Here is a whole herd of some kind of deer-like creatures. Maybe a kind of impala? They seem quite comfortable all crowded together.

Got to stop this; I'm going to bed. You can take a trip with the Wildcam here. According to the sponsors, the camera will be up until December 8.
Posted by janinsanfran at 9:48 PM