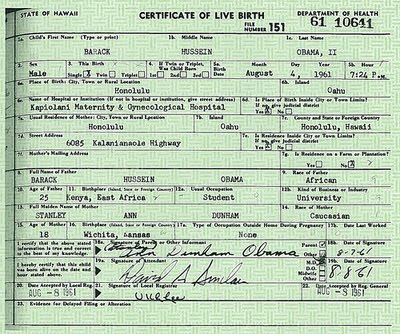 So the President has released his birth certificate and so what? The State of Hawaii says he was born just where and when he always claimed to be. I'm hardly surprised.

I know perfectly well why the nation has been afflicted with "birtherism" for the last couple of years: But that's not what I want to post about. What's getting to me at the moment is Republican elites' response to being called out about the 47 percent of their folks who are birthers: "But Democrats had/have truthers ..."

Truthers refers to the cohort that believed at times that George W. Bush or his government had advance knowledge of the 9/11 attacks and let them happen. According to a poll by Rasmussen, in 2007, 35 percent of Democrats thought this was the case, not quite up to current Republican birther numbers, but a lot. After all, according to the 9/11 Commission: on August 6 2001, the President had been given a Daily Briefing headed: "Bin Ladin Determined To Strike in US." A warning is not evidence, of course, but it's existence didn't quiet suspicions either.
***
I was never a truther, mostly because I don't tend to believe anyone's conspiracy theories. Big institutions can't pull off conspiracies and get away with them. People talk. (See also the leaks from the "secret" torture regime the U.S. adopted in the last decade.)

But I was always a "delighter" -- I believed that Dick Cheney, David Addington, and their neo-con fellows -- puppet-masters of the lazy Bush -- were thrilled that the 9/11 attacks gave them cover to shred constraints on executive authority.

They danced gleefully ahead, violating international norms for going to war and for war's conduct as well as tossing aside "quaint" notions of the immunity of citizens from law-free searches or incarceration without judicial redress. They loved 9/11 -- the deaths of several thousand in New York and Washington, complete with pictures, gave them license to fulfill their fantasies of imperial domination.

They remain untried war criminals whose escape from judicial examination disgraces this country. The current President seems to like their policies enough to make himself, if not their peer (I doubt he's a delighter; that's what passes for an upgrade these days), their accomplice after the fact in the destruction of the rule of law in this country.
***
These days, according to the AP, about 25 percent of independent voters are birthers. It's pretty obvious that the 75 percent of independents who are not (currently) birthers are the Obama re-election campaign's target for the release of the Hawaii document. Obama needs their votes in 2012, so he needs to rub in that Republicans are abetting idiotic believers in racist fantasies.

The birther obsession is an opportunity for the Obama campaign. He's getting his political mojo back in time for re-election. Somehow he doesn't seem so good at using it to govern.
Posted by janinsanfran at 4:10 PM

Yeah well, the birthers still don't believe him. But I knew that would happen.

The GOP is like the "Chicken Littles” always saying that the “Sky is Falling”, like the same ones that were the “Chicken Hawks” ("W" Wars), big talk no courage.

The United States, favors creativity wherever it can be found. We're apostles of prosperity and defenders of the free exchange of ideas and when more people in more countries are free to rise, to invent, to communicate, to dissent, it's not the doom of United States leadership, its the triumph of the American way.

Generations have worked hard and sacrificed much for the country to reach this point (individuals and our unions!), and with further hard work and sacrifice (along with our relentless self-doubt) the United States will rise again, we do not tire and we are coming back, no matter what Fox news and their GOP “Chicken Littles” lackies keep saying about our nation. Never Bet Against the United States!

Our current President travelled under a USA passport long before he was elected President, but I guess the quacky BIRTHERS, must believe that the USCIS – United States Passport was in on the lie, please, grow up, you are wrong! Remember when some contractors were busted during the “George W. Bush” administration for looking at our current President passport file (how quick you forget).
http://swampland.blogs.time.com/2008/03/20/obamas_passport_files_hacked/

The majority of the voting public ask “where the proof”, show some proof BIRTHERS or the voting majority will continue to see you as dumb, stupid or racist, maybe all three. Can you blame them?

Still, I really hope one of these retreads and blowhards runs for president, not because they have a chance of winning but because I like to see the train wreck that they will cause.

I Finance Myself:
real estate celebrity developer, Donald Trump, “I took my Casino into Bankruptcy, just imagine where I can Take the US”
former Massachusetts Gov. Mitt Romney “The Flip-Flopping Fudger”,
former Florida Gov. Jeb Bush “The I Am Not My “Dumb Ass” Brother”,