When class consciousness died, crazies thrived, and nothing rose again ... 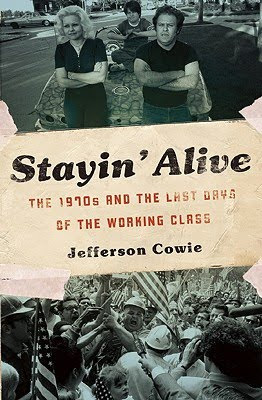 Reading Jefferson Cowie's Stayin’ Alive: The 1970s and the Last Days of the Working Class amounts to reading about a formative chunk of my life. As a college-educated young lesbian aspiring to make a living working in residential carpentry, I lived many of the decade's difficult intersections as the older forms of working class consciousness ran into demands for racial and gender equity wrapped in '60s culture. It wasn't usually comfortable.

I got my break into construction from an older white Irish Catholic carpenter who had once been president of his union local, then struck out as a small contractor. He was doing what many of the guys aspired to, but few succeeded at. We (my female partner and I) picked up bits of laboring work on his jobs, but wanted to learn more. He agreed to give us an informal apprenticeship -- but he wasn't going to try to get us into the union. He'd been down that road with a couple of Black carpenters. He just didn't think he had the stamina to go through the abuse that would follow if he tried to sponsor girls! We learned well; my partner went on to become a civil engineer; I spent nearly 15 years working my tools and later organizing projects (that's where the class privilege I brought to the job came out). Other women, tougher than I, fought their way into the union, but soon union jobs became few and far between. Today a few big union jobs remain, mostly public sector contracts and housing when there is housing construction. Residential work is all non-union, mostly done by undocumented (though often skilled) immigrant laborers. Both who the workers are and how work is organized has changed profoundly since the 1970s.

Much of the first half of Cowie's history is about how the labor movement failed to navigate the transition from the heyday of working class organization under the New Deal through the racial and gender traumas and cultural changes of the '60s. Labor and its constituents apparently couldn't imagine that the bargain between workers and capitalists begun under FDR and surviving through the '50s might be a short-lived anomaly. So they flunked the measures that might have defended them.

The complacency evident in labor's failure to organize new workers or to help create a more expansive working-class identity beyond the industrial core of the AFL-CIO became evident as organized labor's strength began to dissolve. Without a strong counter-presence in the growing and diverse service and clerical industries -- as well as political reforms, new labor leadership, and new voices necessary to organize new sectors -- the unions' ability to withstand the attacks from politicians and business leaders weakened along with their industrial base.

Union leadership had bought into the notion that all they had to do was cooperate with companies to grow the whole pie and their workers could then bargain for a good share.

The job of labor leaders was to support and grow, often quite vigorously, the promise of the existing Keynesian dream of full employment and broad-based consumption and, more often than not, fight off quite vigorously anyone or anything that challenged its basic structure -- including at times the unions' own members.

The early part of the decade saw several interesting labor eruptions whose exciting promise I remember well: the United Farm Workers grape and wine boycotts (full disclosure: I worked several stints for the UFW), the J.P. Stevens boycott of Southern anti-union textile factories, and also insurgencies inside big unions including Mine Workers and Steelworkers. But not only was the economy in deep trouble because of interruptions of oil supplies and the early phases of deindustrialization, but also, cultural winds made most unions look like strange fossils from another era to most of us young people. Cowie has retrieved a truly representative quote from Karen Nussbaum who was creating an advocacy organization for women clerical workers, "9to5."

"It never occurred to me that unions were a force for social change. . . . That was the milieu. That wasn't where the impetus for change was coming in society, and that's why it didn't occur to us that that's where it should be."

That's exactly how many of us thought in that decade.

Cowie spells out an insight that I had vaguely grasped, but which helps explain why the "new social movement" folks couldn't even imagine making common cause with the labor unions.

Although race and class are lived as a unified social reality, the separation between labor rights and civil rights is hard-wired into postwar policy. The two legislative landmarks that shape occupational justice are the NLRA (193S) and Title Vll of the Civil Rights Act (1964). 'The former held out the right to form unions during the Great Depression and delivered immigrant Europeans to a sense of economic and political citizenship during the New Deal period. The latter created the Equal Employment Opportunity Commission during the black freedom struggle, which prohibited employment discrimination by race, sex, creed, or national origin.

A coherent labor market policy would confront both collective economic rights and the right to non-discrimination, but the two pieces of legislation were products of separate struggles, separate policy traditions, and separate judicial spheres. ...

The roots of the problem stem back to the New Deal itself. The passage of each piece of New Deal labor legislation came with the political cost of keeping blacks, and, less consciously, women, from joining unions. ... Diversity and individual employment rights have carried a great deal of misplaced political freight that should be shared with questions of class and structural economic inequality.

The structure created by past political compromises (mostly at the expense of Blacks) had horrible political ramifications over the course of the decade, from the decision by the AFL-CIO's George Meany not to back Democrat George McGovern in the 1972 presidential vote, through the failed Carter presidency, and election of Ronald Reagan and his merry band of rich sponsors in 1980. I'll take up Cowie's insights into the political implications of that time in a second post.
Posted by janinsanfran at 4:00 AM

Interesting. The closest I've been to the anachronistic ancients of the early 20th century union movement is the stagehands' unions in San Francisco which have work rules to this day that are so absurd they defy belief. And let's not even go into the nepotism, racism, and outright blindness/stupidity.

Something needs to replace these groups, but what? If anybody would know, it's you.