Mixing it up: religion and politics in the U.S. 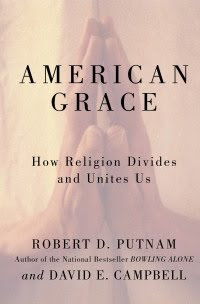 Professors Robert D. Putnam (Harvard) and David E. Campbell (Notre Dame) have digested a vast mass of sociological data, conducted their own further surveys, and tried to make sense of the shape, trajectory and political implications of religion in the current United States. Since we are such a religious society (83 percent of us claim some religious affiliation), it's a big subject. The result is a 550 page tome, American Grace: How Religion Divides and Unites Us.

Their core narrative is that in the second half of the 20th century, U.S. religion -- in all its Catholic, Protestant, evangelical, Jewish, and ethnic and other diversities -- experienced one huge shock and two aftershocks. The first shock was the sudden increase in general sexual permissiveness in the late 1960s. For example, between 1969 and 1973, the number of survey respondents who condoned premarital sex increased from 24 to 47 percent! And the number has never dropped since, as about 80 percent of young people adopted a permissive view and have not changed their minds as they have aged.

The first aftershock was the consolidation of people who were appalled by this sexual permissiveness into conservative, mostly evangelical Protestant, religious bodies in the 1980s. Concurrently, Republicans branded themselves as the party of God and the godly and have never let go of that brand.

In the 1990s, a second aftershock saw young people react against the perceived intolerance of religious right politics by more and more identifying their religious affiliation as "none" (though not necessarily as atheist). Today, according to Putnam and Campbell, there are more self-identified "nones" than mainline Protestants; all the traditional religious varieties have trouble incorporating their young people.

Moreover, many in this country switch religious affiliations and intermarry with great frequency. Though we remain a very religious nation, as many of one third are no longer part of the religious framework we grew up in.

All this moving around has been accompanied by a massive political sorting. Here's some of the book's analysis of that:

...a half century ago political ideology and religiosity were essentially uncorrelated in America, with lots of liberals in church pews and many unchurched conservatives. Even today, among those who have inherited their religious affiliation (that is, nonswitchers) the correlation between religion and politics is much more muted than among those who have chosen their religious affiliation (that is, switchers).

Somewhat surprisingly, this pattern of switching suggests that people whose religious and political affiliations are "inconsistent" as judged by today's partisan alignments--that is, liberal churchgoers and unchurched conservatives--are more likely to resolve the inconsistency by changing their religion than by changing their politics. We were initially skeptical of this finding, since it seemed implausible that people would hazard the fate of their eternal soul over mundane political controversies. But as we probed the evidence, the case seemed stronger. ...When religion and politics were initially inconsistent, religious commitment, not political commitment, was more likely to change.

My emphasis. So is our national attachment to religion simply a stand-in for poorly articulated political views? Putnam and Campbell would say no. They adduce examples from U.S. history of leaders whose religious affiliations would put them on the right today but who were radical populists in their own time, most notably William Jennings Bryan's 19th century crusade against finance capital. But I have to wonder about this. In a country where political ideology is ill-defined, even incoherent, do our religious enthusiasms act in the place of political affiliations?

In any case, this wouldn't matter too much to Putnam and Campbell, because their other core finding is that most of us are tolerant of religious differences. We have to be.

Most Americans are intimately acquainted with people of other faiths.

We not only meet people with different religious faiths at work or in schools, but even among our own families. How could we consign them to Hell? And this tolerance is growing over time. Happily, we seem unable to believe our neighbors must be condemned.

...Young people today are even more accepting of other religions than their parents and grandparents. According to the 2007 Faith Matters survey, nearly nine in ten (87 percent) Christians under age thirty-five believe that non-Christians can go to heaven, compared to 70 people sixty-five and older.

There's change for the better!

There's one large area in which religion and politics intersect that these authors have not examined and I think the omission dilutes the value of their study. Putnam and Campbell apparently chose not to look into the uncomfortable question of the implications of various religious affiliations on acceptance of the truths of modern science. They mention in passing that

...over three quarters of the most religious reject evolution altogether, and believe instead that God created human beings less than ten thousand years ago. Interestingly, this position is also held by 16 percent of the least religious.

That is, by the standards of the rest of the rich world, we are a scientifically ignorant nation and our religions have a strong role in maintaining this ignorance. This bodes extremely poorly for the ability of our political system to meet the challenges of climate change; the planet's future well-being will demand scientific understanding. Can we adapt our religious enthusiasm to accommodate the material knowledge that we will need to preserve the planet?

As the world's most successful industrial-age consumer and polluter nation, we have a global responsibilities here. It is unfortunate that American Grace did not take up this facet of our national religious landscape. I suspect that within a decade it will seem central.
Posted by janinsanfran at 5:00 AM