It's long been clear that, at the operational level if not at the elite level, the widespread adoption of torture of prisoners swooped up in current US wars came in part out of ignorance and prejudice mixed with an impulse to take for revenge. 9/11 bloodied our noses; we'll show these haajis

The impulse to take revenge can feel like a vigorous application of a sort of rough justice; I am sure some of the guys who had fight our wars adopted that understanding of what they were doing. But as numerous atrocities demonstrate -- see for example the recently disclosed kill team photos -- an opportunity to be judge and punisher of people with no discernible connection to the offense lets loose the torturers' own demonic side.

Every once in awhile, someone who knows what he is talking about just comes out and says so. Here's Matthew Alexander, a former senior military interrogator in Iraq who found that implicit permission to brutalize suspects was getting in the way of both protecting US troops and their mission.

...a common parlance that was said by some interrogators and analysts, which is that Arabs grow up in a culture of violence, so they only understand violence.

And so I think you can make rules that prohibit torture. But if you don't also make improvements to the way that we train and educate soldiers, that we'll still have incidents of torture and abuse. They might be much more rare, but the underlying conditions will still be there.

What soldier do while on a hostile battlefield is bad, but when a federal judge in New York City buys into the poisonous pleasure of revenge, we're pretty far gone. Karen Greenberg who directs NYU's Center on Law and Security reports that Judge Lewis A. Kaplan seemed to veer into that territory in statements at the recent sentencing of Ahmed Ghailani for participation in al-Qaida's African embassy bombings in 1998. The judge lectured from the bench:

Whatever Mr. Ghailani suffered at the hands of the CIA and others in our government, and however unpleasant the conditions of his confinement, the impact on him pales in comparison to the suffering and the horror that he and his confederates caused. For every hour of pain and discomfort that he suffered, he caused a thousand-fold more pain and suffering to entirely innocent people.

He's not talking about some "harsh interrogation," perhaps by officials looking for a ticking time bomb here; Kaplan is endorsing our spooks forcefully punishing a putatively (but untried) guilty captive. Guess he's never noticed they do make mistakes; ask Khalid el-Masri or Maher Arar. Civilized countries use legal proceedings to determine guilt -- and 147 countries have signed on to the U.N. Convention against Torture, including the United States. 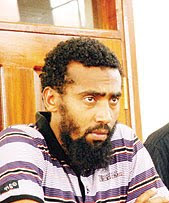 Meanwhile, both the United States and the United Kingdom seem to be implicated in new torture cases under the cover of investigating bombings in Kenya in 2010. Clara Gutteridge writes in the Guardian that about a man "rendered" from Kenya to Uganda.

... Omar Awadh's case raises serious concerns that the FBI is running – with British complicity – what is essentially a sort of decentralised, outsourced Guantánamo Bay in Kampala, under the cloak of legitimate criminal process. ...

Since Omar Awadh was brought to Uganda, he has been singled out for harsh treatment and intensive interrogations by foreign agents, and routinely physically abused and subjected to threats. On one occasion, Awadh was kicked, slapped and had his legs stepped on by Ugandan officers, in the presence of individuals who had previously identified themselves as being from the FBI. Awadh has reported being beaten because he refused to give US agents a sample of his DNA; on another occasion, a gun was pointed at him during an interrogation.

... The allegations against Omar Awadh are that he participated in meetings in Nairobi with several co-accused, and that he was arrested by Ugandan police with incriminating items in his possession.

However, after six months of detention and interrogations, Awadh has still not been given any further details of any of the evidence against him. Indeed, Awadh's interrogators appear to have focused on topics that are totally unrelated to the offences with which he has been charged. He has reported to his lawyer that his interrogators have said that they do not believe he was involved in the Kampala bombings, but they want to interrogate him about other matters. This suggests that the Ugandan criminal process is being used as a veil behind which Omar Awadh is being held "beyond the rule of law" for illegal interrogations by foreign agents.

Sounds like Dick Cheney's "dark side" is alive and well in Kampala under the Obama administration,
Posted by janinsanfran at 4:00 AM