Can religions get along? 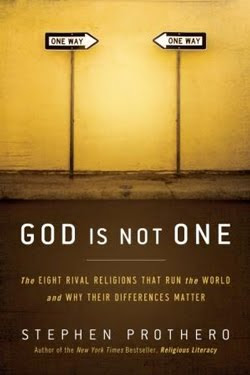 Stephen Prothero's talks on the radio show Interfaith Voices tweaked my interest in reading God Is Not One: The Eight Rival Religions That Run the World--and Why Their Differences Matter. The book is a good introductory text on the big faiths, but it was the author's asides on what it is like to try to study and teach about comparative religion that really grabbed my attention. Christianity is taken as the norm for religion in this country, actually Christianity of a Protestant sort at that. And the result is that even scholars tend to see how other people define and structure their interaction with whatever they think their ultimate concern might be though a distorting lens.

For example, take this observation from Prothero's discussion of Confucianism:

There is a persistent, unexplored bias in the study of religion toward the extraordinary and away from the ordinary. In the United States this bias manifests in a strong attraction (even among scholars who are atheists) toward hardcore religious practitioners -- people who are slain by the Spirit and speak in tongues -- for whom religion arrives as rupture rather than continuity. This bias leads us to see evangelicals as more "religious" than liberal Protestants, Orthodox Jews as more "religious" than Reform Jews, and Confucians as hardly "religious" at all. But there is nothing irreligious about the Confucians; it is our categories of analysis that are confused. If we listen to Confucians in their own voices and on their own terms, we will see how religion can incarnate in very different forms.

Perhaps this particularly grabbed my attention because of a recent conversation with a Chinese American friend who assured me that "no one in China is religious." Maybe he was just being fully American, seeing religion only where our culture leads us to look for it. Prothero's observations of Buddhism and Daoism as well as Confucianism would suggest that might be so.

Another interesting tidbit from Prothero concerns his effort to explain the Yoruba faith (in the U.S. usually encountered as Santeria.) The dominant scholarly typology leaves little room for recognizing this African-derived tradition at all.

Books on the world's religions often include a chapter on "primitive," "preliterate," or "primal" religions, as if they were one and the same. All these religions really share, however, is a stubborn refusal to be crammed into the boxes constructed to fit more "advanced" religions. Stuffed into these chapters (which often fall at the end of the book) are all sorts of religious traditions that in many cases have far less in common with one another than do the "advanced" religions. As a result, these chapters often read like half-hearted apologies for the tendency of scholars (many of whom are trained in translating and interpreting scriptures) to gravitate toward religions that emphasize reading and writing over speaking and hearing.

But the tendency to lump Australian and Native American and African religions with such lower-case religious phenomena as shamanism, totemism, and animism is driven by another, equally important bias. Just as considerations of black and white have dominated conversations about race in the United States, and considerations of Anglophone and Francophone have dominated conversations about culture in Canada, conversations about the world's religions have been dominated by the East/West divide. In BU's Department of Religion, our year-long introduction to the world's religions is split into Eastern and Western semesters. Unfortunately, this approach obscures and often renders invisible religions that do not fall easily along either side of the East/West divide.

Prothero's aim in this book is to explore seriously how various faiths are unique -- in the hope that knowing each other better will help us get along. He's an advocate for what he calls "religious literacy." Meanwhile, we all live in a world where atheists and "perennialists" -- those who jump across religious differences too facilely, seeing only ethical similarities -- try to make peace without understanding.

He thinks his profession, scholar of comparative religion, has something to offer that shouting combatants in religious controversy aren't appreciating.

There is a difference between doing art history and making art. Art historians can be artists, of course, but creating art and interpreting it are two very different projects. And so it goes with doing and interpreting religion. Some scholars of religion are religious, of course, but there is no faith requirement for the job, just as it is not necessary to be a sculptor or painter to be an art historian. ... The problem with Godthink of either the New Atheist or the perennial philosophy variety is that each camp fails to see what should be obvious to any outsider -- that theirs are theological positions too. ...

If human beings acted in their families, communities, and nations purely on the basis of greed and power, then economists and political scientists could do a decent job of describing the world. But people act every day on the basis of religious beliefs and behaviors that outsiders see as foolish or dangerous or worse. Allah tells them to blow themselves up or to give to the poor, so they do. Jesus tells them to bomb an abortion clinic or to build a Habitat for Humanity house, so they do. ... Call this good news or bad news, but by any name it is the way things are. So if we want to live in the real world rather than down a rabbit hole of our own imagining then we need to reckon with it.

I can go with that.
Posted by janinsanfran at 4:00 AM

There is lots to think about here. I will ponder on what I have read here and see how it relates to my outlook.