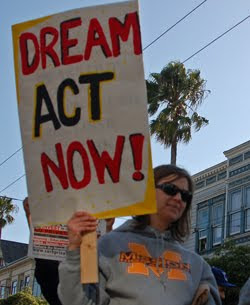 Now if we can just persuade the Feds not to deport them when they graduate ...

The U.S. Supreme Court rejected a challenge Monday to a California law granting college tuition discounts to high school graduates in the state, regardless of immigration status - a law that saves illegal immigrants, among others, nearly $23,000 a year at UC campuses.

The 2002 law, intended to encourage youths to attend college, enables illegal immigrants and out-of-state residents to pay the same lower fees as California residents if they attended high school for three years in the state and graduated.

Throwing away young people who've succeeded in our schools and whose undocumented status is simply an accident of their parents' history is stupid. Glad to see that California -- and apparently eleven other states -- are not so poisoned by fear of immigrants that we refuse to give kids who grow up within our boundaries a chance.

Actually even California's current hamstrung state legislature is doing what it can for these young people. Last week,

the California State Assembly approved the DREAM Act ... by a landslide 46-25 vote -- legislation that would allow illegal immigrants who have, against all odds, earned their way into state universities, a chance to receive financial aid.

Now the bill needs to pass the state Senate and move on to Governor Jerry Brown's desk. A similar law passed twice before, but our former Governator vetoed it. Brown promised to sign the bill during last fall's campaign. We'll see if he comes through; he owes his election to a huge Latino vote margin.

For more information on efforts nationally to enable young people who've grown up in the United States without papers and graduated from high school to earn citizenship by serving in the military or going to college, check out the DREAM Act.
Posted by janinsanfran at 4:00 AM