On leadership in another time when the system reached impasse ...

... [Obama's has] been a pretty tepid and unimaginative presidency and at a moment in history where bigger and harder decisions were needed.

I agree with Walt -- we desperately need more imaginative leadership and bolder decisions. We are mired in multifaceted intractable problems that, despite the United States' fading status as the world's lead empire, have planet-wide implications. Yet our politicians and institutions seem unable to take up the work of dealing with these realities at home or abroad.
*** 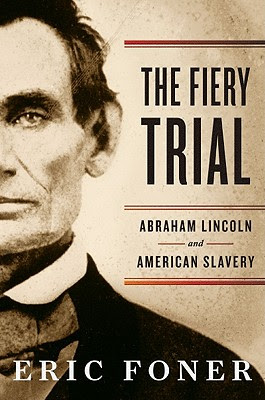 Meanwhile, I just finished reading with fascination Eric Foner's The Fiery Trial: Abraham Lincoln and American Slavery. In fact, I read it through twice. It's that gripping -- and it gave me a lot of think about. Much of that thinking arises from appreciating that Foner is drawing a picture of another era when the U.S. system of government proved constitutionally unable to solve its vital presenting problems. Lincoln's trial, and the nation's, was the result.

Foner's picture of Lincoln, as the subtitle indicates, makes the struggle over whether slavery would continue the center of the Civil War era impasse. That may seem obvious, but it was not always so. I grew up in a time when historians had acceded to Southern insistence that we'd had a "War between the States," an argument about states' rights that somehow turned violent. As a young person haunted by visiting Civil War battlefields where tens of thousands died, I doubted that this conflict was about anything so abstract and bloodless. As a young liberal, I leaned toward the historiography of Charles A. Beard, now largely forgotten, that placed the war in a context of class conflict leading to capitalist development. Nonetheless, coming up in the civil rights era of the 50s and 60s, I could hardly forget that the Civil War was somehow about the full humanity of "the Negroes" as we would have called African Americans at the time.

Slavery and how to end the institution that held 4 million Black people in bondage frames Foner's history. Here's how he introduces his project:

... My aim is to situate Lincoln within what Charles Sumner, the most outspoken foe of slavery in the U.S. Senate, called the "antislavery enterprise." This social and·political movement encompassed a wide variety of outlooks and practices. At one extreme, it included abolitionists who worked outside the party system and advocated an immediate end to slavery and the incorporation of the freed slaves as equal members of society. It also included those who adhered to what Sumner called "strictly constitutional endeavors," including steps to prevent the westward expansion of slavery and, in some cases, plans for gradual emancipation with monetary compensation to slaveowners and the "colonization" of the freed people outside the United States. At various times, Lincoln occupied different places on this spectrum.

... Much of Lincoln's career can fruitfully be seen as a search for a reconciliation of means and ends, an attempt to identify a viable mode of antislavery action in a political and constitutional system that erected seemingly impregnable barriers to effective steps toward abolition. For most of his career, Lincoln had no real idea how to rid the United States of slavery, although he announced many times his desire to see it end. But in this he was no different from virtually every other antislavery American of his era. ... If Lincoln achieved greatness, he grew into it. Not every individual possesses the capacity for growth; some, like Lincoln's successor as president, Andrew Johnson, seem to shrink, not grow, in the face of crisis. But to rise to the occasion requires not only an inner compass but also a willingness to listen to criticism, to seek out new ideas. Lincoln's career was a process of moral and political education and deepening antislavery conviction.

Rather than try to summarize Foner's dense volume, I'm just going to throw out some highlights from what I learned, hoping they intrigue readers as they did me. At one point in The Fiery Trial, Foner remarks

History, it has been said, is what the present chooses to remember about the past.

This volume indeed gives those of us obsessed with the current impasse in government many insights, "a usable past." That's what I want from the study of history. Foner delivers. Some may criticize such a history; I applaud.
Posted by janinsanfran at 9:43 AM