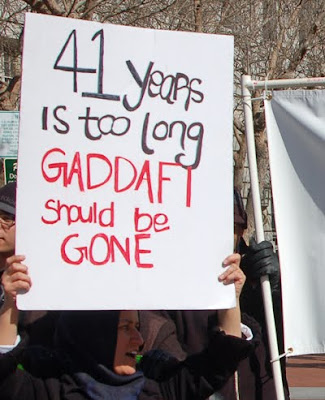 Apparently the U.S. House of Representatives voted overwhelmingly against authorizing Obama's war in Libya this morning. Seventy Democrats joined all but eight Republicans to knock the measure down.

For a nice change, the vote quite accurately reflects feelings in the country. According to Gallup, in aggregate, 39 percent of us approve, 46 percent disapprove, and 15 percent aren't saying. The issue has become mildly partisan. Republicans and independents disapprove more than they approve (47-39 and 52-31 respectively) while Democrats were always more supportive of the president they elected and still approve, 54-35 (pretty much the same as in March).

I was uncertain but worried in March. These martial adventures have universally been bad news in my lifetime. I am horrified by the aspect of this one that amounts to assisting anxious Europeans to hold back a feared hoard of dark immigrants. But I was aware that thee are people who know more about these things than I do, such as Conor Foley and Marc Lynch, who think NATO's war on Gaddafi is a right action. So I'm a little conflicted though instinctively disapproving.

However, I am absolutely certain that the President's ludicrous explanation for blowing off the requirement that Congress approve the mission -- his claim that the Libyan adventure does not amount to "hostilities" -- signals a deep disdain for any legal limit to his executive power. Responsible lawyers, including many past allies, have called "foul." When presidents can get away with taking us to war without seeking even a fig leaf of approval from the legislative branch of government, we are well on the way to one man rule.

Since Democrats in the majority in the Senate are not likely to go along with the House in repudiating their President's war, today's vote against the Libya adventure is not likely to have any practical effect. It's all just one more sign that our creaky Constitutional edifice is rotting away.

Photo is of a Libyan demonstrator in San Francisco, several weeks before NATO began bombing. I have to wonder, what does she think now?
Posted by janinsanfran at 11:54 AM