The federal Department of Health and Human Services deserves credit for issuing a letter telling state Medicaid authorities they can apply the same rules to gay couples that they do to heterosexuals. They can allow a healthy partner to retain their home when a disabled partner needs Medicaid to pay for nursing home care. It used to be that the "unrelated" partner would have to sell the house before Medicaid would pay for the sick partner. This is only advisory. It won't help in aggressively anti-gay states like Texas, but it could lead to great relief of suffering for couples in more enlightened jurisdictions.
***
DOMA (the federal Defense of Marriage Act) still causes material discrimination. I encountered a small example this week. My partner is an adjunct faculty member at a private university where these quasi-temporary employees enjoy a good union contract. One of her benefits is that a spouse may enroll for free in one course per semester. This being San Francisco, as far as her employer goes, I'm her legitimate spouse. So we looked into this and discovered a Catch-22: the cost attributed to my course would be credited to her as salary for federal tax purposes (not state, as California treats us as if married) because DOMA prevents the IRS from recognizing our partnership. So, for gay couples, this benefit is absolutely not "free," though it is for straight couples. No course for me this year.
*** 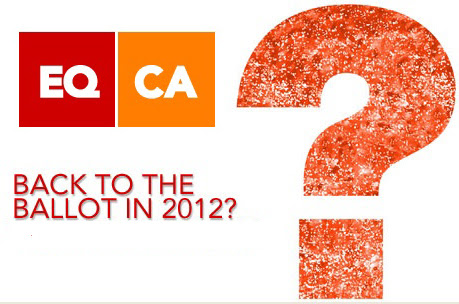 Equality California has been holding a series of meetings and online sessions to involve LGBT people and their friends in the question of whether to try to repeal the gay marriage ban, Prop. 8, by a ballot measure in 2012. (Unless it gets thrown out in the courts, it has to be repealed by a popular vote because it was put in by vote in 2008.) They shared polling which shows some, but not much, movement. Older people still don't approve -- but more of them are less sure about that. Opposition to our rights still correlates with frequency of church attendance. Young people still overwhelmingly support marriage equality. There's some hope that adding an explicit element to the measure reiterating that religious organizations would not be required to perform gay marriages would help. But there's still no overwhelmingly clarity about the path forward.

For 2010, I was vehemently opposed to going back to the ballot; the issue had not ripened and we weren't ready. This time around, I'm less sure. California is unlikely to be an electoral battleground -- we'll vote for Obama even if most of the country won't, as I think likely. That means we won't necessarily have an enlarged or aroused electorate. Winning the campaign would be hard and costly. Can the community afford it? And winning looks like no sure thing, though possible. I remain agnostic. Organizationally, a ballot campaign should decide by this fall whether it's a go.

If you have views, follow the link to Equality California and take their "Back to the Ballot" survey.
Posted by janinsanfran at 8:27 AM