Last night I heard something odd coming from the TV in another room. Some guy was animatedly lecturing on KQED (local public television) about brain scans and weight loss and it all sounded like a sales pitch for a fad diet scam, the sort of thing that you expect on the The Shopping Channel, not on highbrow TV.

A quick look at KQED's listings produced this:

Amen Solution - Thinner, Smarter, Happier with Dr. Daniel Amen
Award winning psychiatrist and bestselling author Dr. Daniel Amen gives you 10 very simple steps that will help you lose weight, boost your memory, and improve your mood. Based on his brain-imaging work with tens of thousands of patients over the last 20 years he has discovered two of the major secrets why most diets don't work. Contrary to what you might think, they have nothing to do with your lack of desire to lose weight or your willpower. In fact, he shows you that for some people the harder they try to lose weight the worse it gets. ...

So who is this Amen guy?

It didn't take much work to find this: 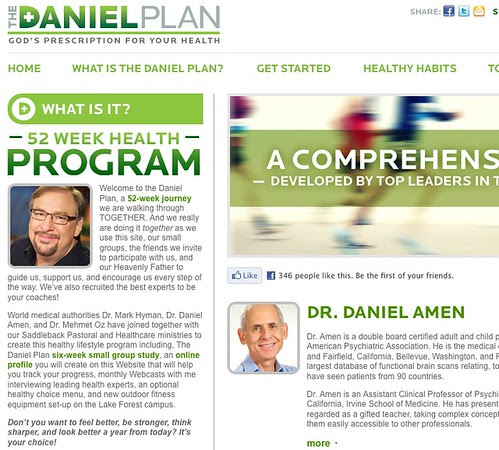 Apparently Dr. Amen -- he does seem to be a legitimate MD, though his claims of university affiliation have been questioned -- peddles his stuff as an adjunct in homophobic mega-chuch Pastor Rick Warren's empire.

Reputable doctors have been trying for years to out this conman. Robert Burton, M.D., former chief of neurology at Mount Zion-UCSF Hospital, describes his exhaustive inquiry into Amen's claims in a May 2008 Salon article. He's almost as disgusted with PBS for hawking this tripe as he is with Amen. The article concludes:

According to the PBS mission statement, "as a non-commercial enterprise, we can maintain our commitment to delivering quality, innovative and distinctive media content as our utmost priority. By guaranteeing our programs treat complex social issues with journalistic integrity and compassion, our audiences know they can rely on us to provide accurate, impartial information."

In the case of Amen, that is simply not true.

Oh, and this Amen character is trying to get in on the cause celebre of the moment, the growing proof, via autopsy not brain scans, that many NFL football players suffer permanent damage from the many hard hits they experience. The legitimate researchers breaking this story seem to be Dr. Bennet Omalu, Dr. Ann McKee and former pro-wrestler Christopher Nowinski. Dr. Amen appears to hope to ride the stardom that has rubbed off on them from what they've learned of the damage to our gridiron heros.

Kind of a sickening play to catch the spotlight, don't you think? And what was KQED thinking to broadcast this junk?
Posted by janinsanfran at 4:00 AM

None come to mind right at this moment, but I've noticed increasing amounts of shopping channel-style junk on PBS in recent years.

Thanks for doing our homework on this guy for us and pointing out the drift of PBS into hucksterland.

Though it sounds like a Republican talking point, the time has come and gone for PBS in general and KQED in particular. They are establishment propaganda mouthpieces, in that noxious intersection of government and corporate public relations departments. Good work gets subsidized on occasion but the amount of money going to the administrative section rather than the creative section is completely grotesque.

OPB here in PDX has become less attractive as its programming shifts to more popular music, little depth. Commenter sfmike makes sense for me: public radio/TV stations in many areas have lost their edge.

I guess it's easy to trash something before you try it. Anyone who speaks publicly will inevitably be targeted by the naysayers, and even find things they can rant about based on a few subjective perceptions.

If you read what you've said here objectively, I think you'll find that you've actually not said anything at all. It makes no sense at all.