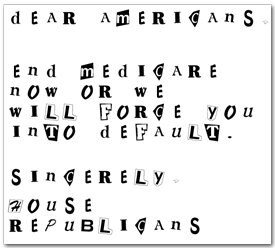 Great -- by holding the debt ceiling hostage, Republicans now have investors trading in what amounts to insurance policies on whether the U.S. will pay its debts. From Stan Collender at Roll Call, one of DC's insider publications:

The best indication of all that the market has already started reacting negatively is the current trading of credit default swaps on U.S. debt. As of late May, the number of CDS contracts — essentially insurance policies on the possibility of a default — had risen by 82 percent. Equally as important, the cost of a CDS — the best indication of how much riskier U.S. debt has become — rose by more than 35 percent from April to May. Last week I spoke to a number of people who calculate such things for a living, and they said this change means that the interest rate the U.S. government has to pay has already increased by as much as 40 basis points compared with what it otherwise would be. This means higher federal borrowing costs and deficits, and overall higher interest rates on everything from car loans to mortgages to credit cards.

Except when something unexpected occurs, the initial changes in market psychology and behavior start with just a few investors who act either because they are more or less risk averse, have better information, or are smarter. That means there are usually small signs of change before a market tsunami hits. In this case, there is now clear evidence that the uncertainty over the federal debt ceiling is already having the negative impact on financial markets that the Republican leadership has said will not occur. Just because it may not yet be obvious to everyone doesn’t mean it’s not happening.

Of course Republicans don't care. They just want bash President Obama and cut taxes for their rich sponsors.
Posted by janinsanfran at 3:58 PM