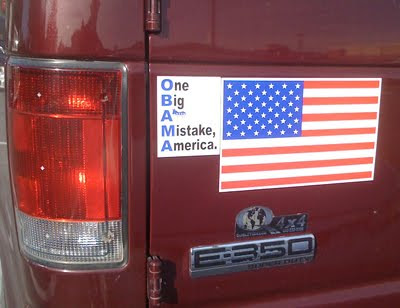 Talking Points Memo seems to dismiss this as goofy and cute. I can't.

America, Mitt Romney understands why you did what you did in 2008. And he's not here to judge -- just help you clean up the mess.

In his campaign kickoff speech in New Hampshire today, Romney sounded like a passive-aggressive ex-boyfriend ready to take the country back after it briefly ran off with the hot new guy in school.

"A few years ago, Americans did something that was, actually, very much the sort of thing Americans like to do," Romney said. "We gave someone new a chance to lead; someone we hadn't known for very long, who didn't have much of a record but promised to lead us to a better place."

..."At the time, we didn't know what sort of a President he would make," Romney said. "It was a moment of crisis for our economy, and when Barack Obama came to office, we wished him well and hoped for the best."

Unfortunately, I've long thought this was the message that could unseat the Prez. It's not a message for rabid birthers, flat earthers and Muslim haters. Whoever gets the Republican nod will get those votes. It's a message that speaks all too well to people who hoped for change in 2008 and got -- instead -- national depression and stasis, with occasional eruptions of loud political conflict.

Unfortunately, there are too many of us in that category.

Republicans have been willing to let the country sink into further public squalor and kleptocracy in order to retake power. They really don't seem to care about anything except having "people like them" at the helm, a little militaristic cheering, and paying no taxes.

But everyone else wanted more, several different kinds of more. And most of us don't feel that we've gotten much of the change we worked for.

The Obama administration has picked off a few low-hanging fruit; numerous government agencies are actually trying to do their jobs, insofar as Congress will fund them. That's a plus. A few LGBT equality measures have lurched forward; since they have majority support, that too seems little and late. We'll probably get out of Iraq in December, but that hardly feels like a great accomplishment, since we never should have been there in the first place. A health insurance bill passed, but most of it doesn't kick in until years from now and Republicans may yet manage to fatally mangle its very tentative reforms before they are even tried. Probably the Administration's greatest accomplishment was helping the auto industry get back on its feet -- a very good thing, but under any sensible regime something that would have been a no-brainer, not a "big deal."

Meanwhile, the labor movement got nothing for pouring its love and treasure into Democratic campaigns. Though people who believe in science are in charge, the country still isn't tackling the implications of human-induced climate change. The Obama administration has continued and relished all the law-free executive powers so beloved of Dick Cheney. And the economy is no better for most people, though Wall Street chugs along vibrantly.

So Romney's "buyer's remorse" message is likely to strike a chord. President Obama looks strong now and his actual existing competitors look weak, even farcical. Most Democrats are never going to vote for any of them. But we're a very unhappy people about to be assaulted with a further barrage of emotionally tinged misinformation and resentment. Who knows what we'll do?

Many people like me, disappointed progressives, aren't going to work for Obama this time around. I can't. When he caved on Guantanamo, refused to sanction anyone for shaming the country by making world-wide kidnapping and torture our national policies, and embraced assassinations of enemies as a routine option, he lost my active support. A person must have some limits of conscience, though I'll probably cast a meaningless vote for him here in California.

But I won't give up on electoral strategies in the face of the Know-Nothing tide. Obama would be a better President with a Democratic House of Representatives -- and Republicans have made themselves unpopular enough that this may be possible. I urge everyone to adopt a plausible House race for a Democratic pick up, get in there and work. There are 75-80 districts where Dems might pull out a victory with the right candidate and some luck. I pointed to one yesterday. Those of us in California will probably have to go a bit afield, though who knows what the new Congressional districts will look like.

I think I've got my mantra for 2012: The House matters. What do you think?
Posted by janinsanfran at 9:32 AM

Because of what is at stake if the Republicans take the presidency, because of all the things Romney would sign on to undo, I'll be supporting Obama again if donating a bit less money. The alternative is unthinkable. If Romney gets it, he's likely to choose someone like Pawlenty or even further right like Bachmann to bring in the teabaggers. I find that intolerable. One more seat on the Supreme Court of the ilk of Roberts and we will see our freedoms taken forever. I think he tried on Guantanamo but didn't have the clout even with the blue dog democrats to do it.

So I agree on the House but also think we have to work for Obama. The alternative is a disaster that would sink us even worse into where we have been. In a second term, Obama might be stronger and take more risks. He sure won't sign to undo the health care we already go. I think he deserves that second chance for all the reasons I voted for him the first time. I sure don't want any Republican I can think of right now who might well be the signature to end choice in abortion, an issue that matters to me for future generations given I grew up when abortion wasn't an option legally and a lot of girls paid a high price for having to go to a backstreet source or try to do it themselves!