What kind of country is this becoming?

According to the New York Times, the F.B.I. has a new manual for its agents telling them when and what they are allowed to do about checking up on citizens. Essentially, they can do pretty much anything they want without the approval of any court or even, usually, any supervision from within the agency. They scarcely even need a plausible suspicion to open what they call "an assessment"; an individual agent's hunch will do.

[Valerie E. Caproni, the F.B.I. general counsel] said the new manual would adjust the definition of assessments to make clear that they must be based on leads. But she rejected arguments that the F.B.I. should focus only on investigations that begin with a firm reason for suspecting wrongdoing.

A fine secret police we've got these days! 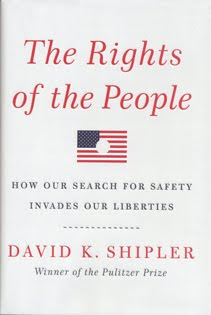 I'm sure Pulitzer Prize winning reporter and author David K. Shipler is not surprised. His new book, The Rights of the People: How Our Search for Safety Invades Our Liberties, chronicles the choices U.S. rulers have made since 9/11, largely with our whole-hearted cooperation, to eviscerate individual privacy and guaranties of liberty. He does a masterful job, cataloging the sorry story of wholesale electronic spying, sneak and peak searches, gag orders, preventive detention under "material witness" cover, "state secrets" claims that conceal government lawlessness, infiltration of political and religious groups, and racial profiling that is the work of the abominably named Department of Homeland Security (love that totalitarian designation).

And this is only the first of two volumes. This one focuses on the demise of Fourth Amendment protections against government snooping on individuals; a further volume will take up how our government is constraining First Amendment rights -- free speech and religious liberty -- and the decline of the legal protections that create the context for such freedoms.

What I liked best about this book was that Shipler put the post-9/11 erosion of civil liberties in the context of their longstanding destruction in poor and, usually, black or brown communities under the rubric of the "War on Drugs." He follows well-meaning, mostly white, cops on the hunt for drugs and street violence in D.C. for whom any right that citizens might have to be secure from random search seems an anachronism from a fantasy world that must be swept aside in the interest of police efficiency.

There is no Fourth Amendment for most of our clients. --Tony Axam, assistant federal public defender, Washington, D.C.

The rest of us, outside those inner cities, have been quite willing to turn away from the lawless void we have encouraged our armed cowboys to enforce in those frightening dark fastnesses.

The post-9/11 destruction of our traditional legal freedoms simply extends this regime to more prosperous citizens with a bit more legal gooble-de-gook. At its core is the confidence of most government agents that they are doing the right thing in a good cause. (We owe a great deal of what we know about this lawless exercise of power to a few individuals within the system who experience scruples.) Government admits few limits on what its agents can do, ostensibly to make us safer. Looking at the power differential, I am far more afraid of the U.S. government at work killing the ennobling idea of a "land of liberty" than of a few terrorists who seek to kill some of us.

Shipler brings an ominous perspective to his gracefully narrated survey:

The best view of American freedoms may be from a country without them, as I learned in Moscow, where I lived for four years as a New York Times correspondent in the Soviet era of the 1970s. Devoid of the intricate balances and protections that preserve individual rights, the Soviet system sent many of my friends to prison camps and Siberian exile after sham trials for the mildest political dissent. ...I wish those who made policy in post-9/11 Washington had spent time in Moscow.

I wish those in power in Washington had identified with the Soviet people, instead of envying their unfettered rulers. The Obama regime is not discernibly better in this respect than the Bush set, though they sometimes talk a better game. We are living the corruptions of power.
***
Full disclosure: My partner and I were interviewed by David Shipler about our brush with the no-fly list in the course of his research for this book. Among the dozens of reporters we interacted with over this minor episode, Shipler was one of the most reflective and measured in his approach to the subject. I have been looking forward to this volume for about five years, because I shared with Shipler completely the insight he says led writing this:

I decided to do this book on the morning of September 11, 2001. Some time around 11 a.m. I finally loosened myself from the grip of the awful images on television, stepped outside into the dappled sunshine of a brilliant day, and in a moment of extreme clarity had an extreme thought: There go our civil liberties.

That's exactly what we said to each other in this household. Little did we know we'd get a bit part in the demise.

If you care at all about what kind of country this is becoming -- about our enjoying a future as a society where freedom is explored and enhanced -- The Rights of the People is a necessary read.
Posted by janinsanfran at 8:29 AM