Ms. Warren was weaselly on what her intended health reform might do to middle class taxes in the debate last night. Not good. She should find her answer and own it. Trump will say she plans to kidnap voters' children and eat them regardless of what she says, so she needs to demonstrate clarity and resolve. (And it seems mightily unlikely that any of these people would actually be able to enact their health reform ideas, however much the people desperately wish health care improvements.) 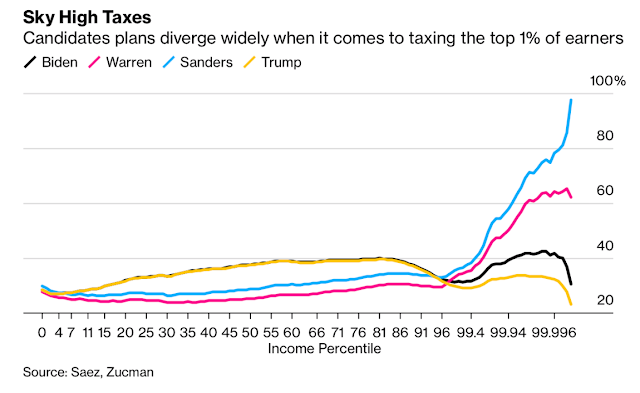 Emmanuel Saez, the Berkeley economist and MacArthur genius, is advising Warren on her economic plans. Consequently this chart from his research offers a useful insight into candidates' competing tax ideas. Donald Trump and Joe Biden's plans follow the same trajectory up to the 96th income percentile; that mark is somewhere well over $200K annual earnings. Warren and Sanders' plans hit lower earners -- most everyone -- for somewhat less. But for the top four percent, Bernie's tax demands shoot up as do Warren's, but not so much. The curve of Biden's plan looks a lot like Trumps' tax structure, though not quite so oligarch friendly.

Tax policy seems super technical -- and it is. But the simple principle which should underlie it is pretty simple: government has the job of promoting the general welfare. Since that costs money, that money has to come from those who have it. Period.
Posted by janinsanfran at 7:04 AM