There's an important election on November 5. If you don't live in Virginia, you might not have focused on this. Democrats have a chance, if they win a few more seats in the state legislature, to take a majority. That matters, because the maps the Republicans drew after the last census were thrown out by a federal court for constituting an illegal race-based gerrymander. If Dems win this year, they'll be in position to stop a repeat during reapportionment in 2021. (Yes, it just never stops.)

Sitting far away on an island in the ocean, there's not much I can to do help. But I took the chance to participate in one of the many expedients campaigns are developing to use the energy of far-flung supporters -- as much as participant research as anything else. 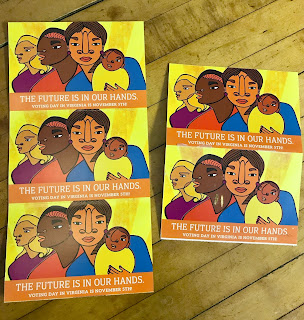 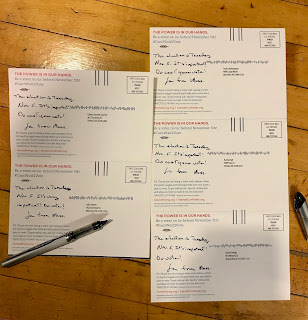 The Moms Rising Education Fund is working (without taking a partisan stance) to encourage infrequent voters to turn out in this election. They sent me five stamped postcards pre-addressed to five people thought unlikely to vote without a nudge. All I had to do was write short notes about the value of their vote and drop them in the mail. This wasn't demanding.

What does this sort of effort do in a campaign? I've written often about the gargantuan scale of volunteer effort necessary to make this kind of approach meaningful. (See this from the Obama campaign in 2008.) An awful lot of volunteer hours can yield a tiny number of votes -- though you want those votes. Contacting infrequent voters can increase their likelihood to vote, but research confirms that the effectiveness of contacts depends considerably on how close and personal that contact is. By far the best contact is the neighbor at the door, followed by a very well trained and competent canvasser, if possible from the same race or language group as the voter. Phone calls mostly are pretty ineffective, especially from remote paid canvassers. Direct mail, robocalls, and lawn signs probably do more to add to the profits of campaign vendors than to getting out the vote.

Sometimes novel methods can increase turnout. As long ago as 1994 in San Francisco, turnout phone calls in English had lost their usefulness. But language appropriate calls to voters most comfortable in Spanish and Cantonese seemed to go well and perhaps increase turnout. Anecdotal reports (and perhaps research I haven't seen) suggest text messages drove some turnout in 2018. I would expect that medium to lose its utility quickly if widely adopted. For a less skeptical view of texting, this paper leans on a concept the authors call "Noticeable Reminder Theory ." Trouble is, what if the random political text becomes just another bit of noise in an over-crowded information environment clamoring for attention? This has been the fate of most novel voter contact tactics.

Yet it remains the case that campaigns too often don't ever touch significant groups of voters -- often people of color or young people.


... Latino and Asian [naturalized citizens] are particularly potent additions to the electorate, with turnout rates that are often 5 to 8 percentage points higher than their natural-born counterparts, according to census estimates.

... Liking a party is one thing. Mobilizing to vote is another. Roughly three-fifths of foreign-born Asian American voters surveyed by APIAVote and AAPI Data said they were not contacted by the Democratic Party or the GOP before the 2018 election.
LA Times

You have to show you know people are there and part of the community if you want them to turn out.

So what do I think of the MomsRising postcards? Interesting. I hope this is being treated as a real campaign method which means it has two prongs: targeting and testing. Did we send our postcards to the right voters, the voters whose participation could have an impact on the election results? That's a targeting data question. More to the point, are these voters the subject of lots of other, more direct, forms of contact -- is someone knocking on their doors, leaving notes when they aren't home, calling ...? I sure hope so. Whatever tiny nudge a postcard gives should be supplemented vigorously.

Moreover, I wonder how MomsRising is testing this effort. Did they try different postcards with different images and messages? Will they go back and look at how many of their targets who received which persuasion pieces ended up voting? 2019 is a good time for trial runs for 2020. Were they able to track how many of the volunteers who offered to do this actually mailed the cards? I sure hope so -- and I sure hope they keeping track of who worked and who didn't.